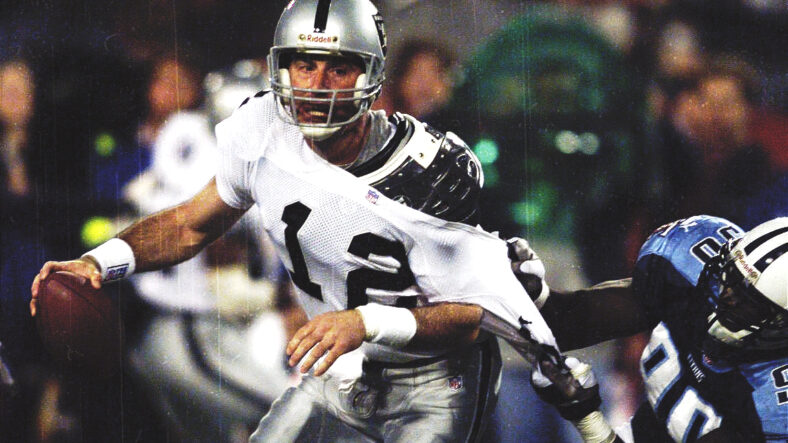 Former Minnesota Vikings quarterback and 2002 NFL MVP Rich Gannon was high on the Vikings before the rest of the world, explaining on YouTube about a month ago that quarterback Kirk Cousins could throw for 5,000 passing yards while wideout Justin Jefferson could post Jerry Rice-like numbers.

He played for the Vikings from 1987 to 1992 before astronomically taking off with the Oakland Raiders a decade later, culminating in a Super Bowl appearance during the 2002 season.

About Jefferson, Gannon said in August, “Jerry Rice, even in his heyday, didn’t have this top-end speed, but I think there are some comparisons with a guy like Jerry Rice.”

Gannon continued with the Jefferson-Rice parallel, “You look at their short-area quickness, their ability to stop, pivot, adjust. I think their ability to adjust to the ball in the air, whether it’s high, low or behind them [is similar].”

And, for one week, Gannon looks like a prophet, as Jefferson ripped 184 receiving yards and 2 touchdowns out of the sky versus the Green Bay Packers. Cousins, who Gannon tapped for the 5000-yard potential, contributed 277 passing yards and the two scores to Jefferson. Heading into the Week 1 matchup, Green Bay’s defense was among the NFL’s most formidable, so Cousins and Jefferson pulling off the aerial theatrics are all the more impressive.

Once the Vikings pivoted to a pass-first philosophy, driven by the hire of ex-Los Angeles Rams offensive coordinator Kevin O’Connell in February, folks clamored to see Jefferson’s 2022 statistical output. Jefferson lived inside a run-first system during his first two seasons, managing to accrue more receiving yards in his first two seasons than any players in history through first and second years. So, with an offensive-minded coach in the saddle, pundits — especially fantasy football brains — forecasted Jefferson for a 2000-yard season.

On that front, it’s so far, so good, as Jefferson is on a Week 1 pace to record over 3,000 receiving yards.

Gannon’s sanguinity for the Vikings was rare at the time. Many saw the Vikings “run it back” experiment as foolish, implying a .500 season as the ceiling for a team led by Cousins. While that could still be accurate, Minnesota’s Week 1 performance in knocking off the Packers didn’t feel congruent with a mediocre team.

Gannon reached the Pro Bowl four times in his 18-year career and played for the Vikings, Chiefs, Commanders, and Raiders.

These are the receipts for his bold proclamations Cousins and Jefferson in August.

The Vikings travel to Philadelphia on Monday night for a date with the Eagles. Minnesota is a 2.5-point underdog.