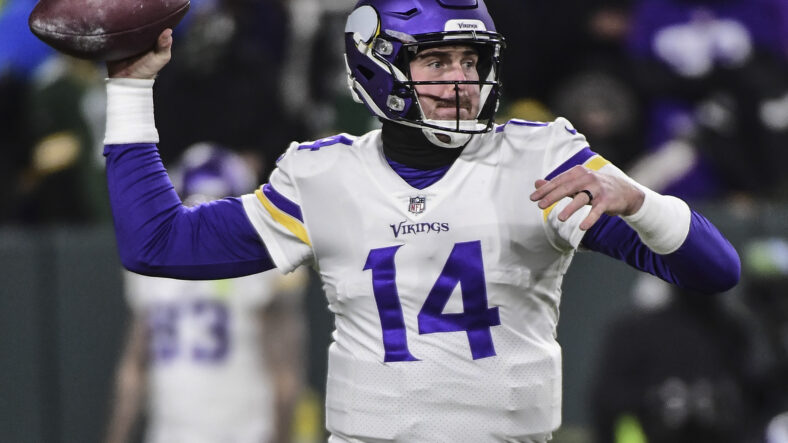 VikingsTerritory‘s Purple Rumor Mill is a two-day chronicle each week. All the week’s rumors are lassoed and plopped in two spots — articles on Saturday and Sunday — for review. Today is the August 14th edition.

Rumor: Sean Mannion will start on Sunday at the Las Vegas Raiders.

Vikings head coach Kevin O’Connell affirmed this week Kellen Mond and Sean Mannion would split snaps in Las Vegas. However, to start the contest, Mannion as the starter seems true.

It really doesn’t matter who starts in the preseason opener, especially if the men receive equal playing time. Perhaps Mannion is getting the nod out of veteran respect. This is Mannion’s eighth season in the NFL.

Regardless, Kirk Cousins has COVID and won’t play at all. He likely wouldn’t have played if he was virus-free. So, Vikings fans will see oodles of Mannion and Mond on the way to determining the QB2. That’s why the preseason exists.

From Sloter’s Twitter fingers, the All-USFL passer expressed his desire to return with the Vikings.

Sloter was released by the Jacksonville Jaguars this week after spending just 16 days on the roster behind Trevor Lawrence. C.J. Beathard, and Jake Luton. He guided the New Orleans Breakers to a semifinal-round playoff appearance seven weeks ago.

Meanwhile, the Vikings could be interested in upgrading on Mond and Mannion, creating a tunnel for Sloter to rejoin the Vikings.

Otherwise, Minnesota would have to pursue a Blake Bortles or Cam Newton-type.

Brock Purdy and Nate Sudfeld will lead the San Francisco 49ers next week at U.S. Bank Stadium unless San Francisco head coach Kyle Shanahan has a change of heart.

After preseason injuries to Zach Wilson and rookie WR Drake London, teams are hesitant — rightfully so — about trotting starters on the field in the preseason.

You should lose zero sleep if the Vikings refuse to play starters — at all — this preseason. It isn’t worth the risk.