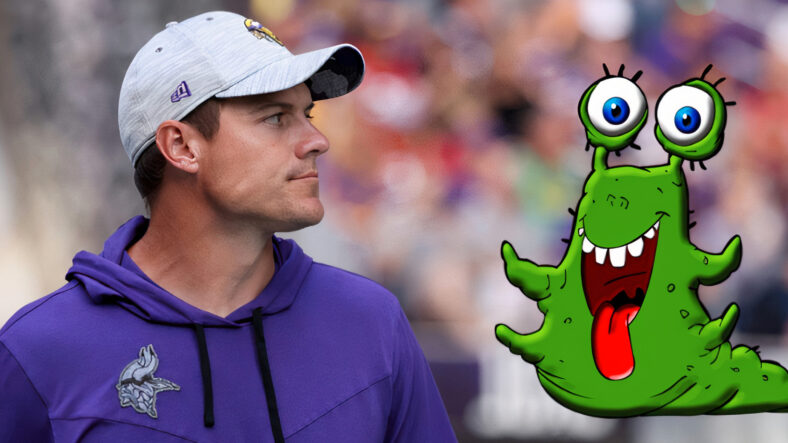 Kevin O'Connell and a Slime Guy

Need evidence that the Minnesota Vikings fundamentally feel different than years past? Oh, do we have the video for you.

The Vikings hired O’Connell in February after he offensively coordinated the Los Angeles Rams to a Super Bowl triumph over the Cincinnati Bengals. To date, the Sean McVay coaching tree, where O’Connell was reared, has produced fabulous head coaches, including Matt LaFleur (Packers), Zac Taylor (Bengals), Brandon Staley (Chargers), and now O’Connell.

Of course, O’Connell has a long way to get before identification as a LaFleur-like coach, but the Vikings did win during his first head coaching experience last week. Accordingly, enthusiasm for Minnesota soared as national pundits and Vegas sportsbooks took notice of the new-look Vikings. Minnesota climbed from +3600 Super Bowl odds to +2400 from Week 1 to Week 2.

And the fun evidently extended to players and the locker room as folks were allowed to introduce slime into team operations. While the physical presence of slime is “no big deal,” the lightheartedness of its use is a steep departure from how Minnesota used to do things.

Down the stretch of the Mike Zimmer era, the atmosphere in Eagan, Minnesota, was reportedly rigid and tight-lipped. Following the exoduses of Zimmer and his boss Rick Spielman, reports indicated the culture had calcified over the last two seasons. Unsurprisingly, 2020 and 2021 marked the start of the Vikings tumble into mediocrity, too.

Reaction to the slime video was positive, and most commenters and retweeters asserted that “Zimmer would never do this,” or something to that effect. Those folks likely aren’t wrong. It would’ve indeed been bizarre to see the slime tomfoolery anywhere associated with the Vikings from 2014 to 2021.

Last week, the Vikings started the 2022 season 1-0, downing the Green Bay Packers by a score of 23-7 in Minneapolis. Minnesota’s offense, defense, and special teams shined, while Green Bay’s everything failed to click. Packers quarterback Aaron Rodgers was irritated for most of the game, and the team only scored once.

Perhaps an even larger bucket of slime will be on the agenda if Minnesota pulls out a win.