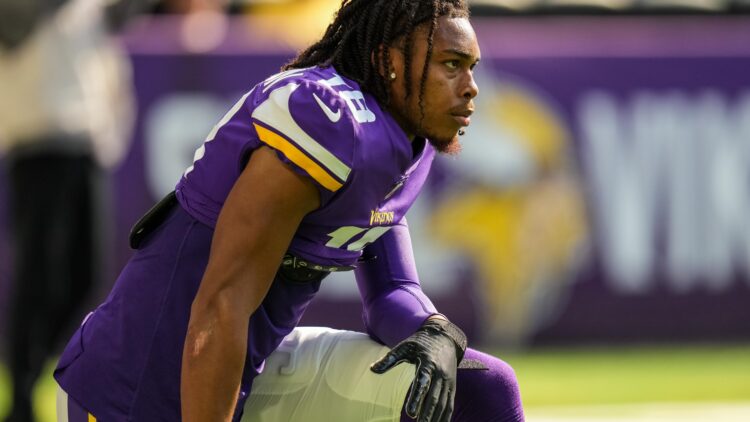 After a blazing Week 1 performance against the Green Bay Packers, Justin Jefferson has struggled to get open and has been shut down in back-to-back weeks. For a player who has a goal of becoming the league’s best receiver and self-prophesied that he would eclipse 2000 yards this season, producing two straight meager performances is disconcerting.

In Philadelphia, Darius Slay neutralized Jefferson, beating him to spots and intercepting two Kirk Cousins passes en route to an Eagles 24-7 win. The following week, Detroit had a clear plan to take Jefferson away at all costs, double-teaming him on all but “8 or 9 total snaps”, according to Kevin O’Connell. “They had a good plan against him. Trying to get their hands on, and play over top,” Vikings receiver K.J. Osborn noted.

In Week 4, it will not get any easier for the Vikings’ superstar. The Saints own a prideful, veteran defense with a lockdown corner of their own in Marshon Lattimore. Lattimore has notoriously shut down division rival Mike Evans, so much so that Evans has lost his cool at times in matchups with Lattimore. Needless to say, Dennis Allen will have a plan to shut down number 18, starting with his star corner.

Moving forward, O’Connell has vowed to do what it takes to get his record-breaking receiver the ball. “I have to do a good job, you know, preparing him and equipping him with the things he needs to help him have an impact no matter how he’s being defended.”

Something that was lost after the Vikings’ impressive Week 1 win over the Packers was that Cousins, Jefferson, and the offense are still learning a completely new system.

Despite earning his first head coaching gig this season, Kevin O’Connell didn’t call plays as the offensive coordinator with the Rams; that job belonged to Sean McVay. So, not only are the players learning a new scheme, the play caller is learning the art of orchestrating drives as well. We shouldn’t be surprised that there has been uneven play at times by the offense, Jefferson included.

Having sparse stretches isn’t unheard of for star receivers, either. Even though Jefferson has had the most prolific two-season start in NFL history for a receiver, he’s had some clunkers along the way. Over a span of three games in 2020, Jefferson was limited to 23 yards in a loss at Seattle and 26 yards in a win at Green Bay. Additionally, he was held to 21 yards in a loss to the Cowboys and 47 yards in a win at Chicago throughout the 2021 campaign [1].

As the most dangerous weapon at Kirk Cousins’ disposal, Jefferson will be keyed on by opponents. Not every game is going to be like Week 1.

The beautiful thing for the Vikings is that even if opposing defenses can limit Jefferson’s production, Minnesota has multiple offensive weapons that can beat you. Kirk Cousins reminded us of this on Sunday in Minneapolis by feeding the ball to Adam Thielen and K.J. Osborn in big spots.

Osborn once again showed his effectiveness in the two-minute drill, receiving all three of Cousins’ targets on the final drive. After hauling in a 29-yard strike – the Vikings’ longest play from scrimmage on the day – Osborn beat former Viking Mike Hughes on a corner route for the game-winning 28-yard touchdown.

Thielen was no slouch either. The pride of Detroit Lakes had his “remember me?” game, wherein he received Cousins’ other touchdown pass, converted a big 4th and 6, and moved the chains on all six of his catches [2].

Heart of a Champion

The most reassuring aspect of Jefferson’s “slow” start is the demeanor that this young man possesses. After his meager output on Sunday, he was seen grinning at his locker during his interview with reporters. “I’m definitely happy finishing the game off with a victory.”

This ambitious superstar just wants to win games; he’s said as much. After his running mate caught the winning touchdown on Sunday, Jefferson quickly joined in the celebration. Standing on top of the bench, he waved a towel to urge the crowd to support the defense in making one final stop.

Possessing a positive mindset goes a long way in sports, although it is often overlooked by media pundits, fans, and even coaches. Justin Jefferson is a budding star that seems to grasp that mentality. From this perspective will come the results that one is looking for, especially for a player of Jefferson’s magnitude. And for that, Vikings fans should be grateful and hopeful themselves.

The best receiver this franchise has seen since Randy Moss will be fine. There will be roadblocks, bumps, and adversaries along the way. Jefferson will get his chance to overcome that first adversary against Lattimore and the Saints defense at 8:30 am CT on Sunday.