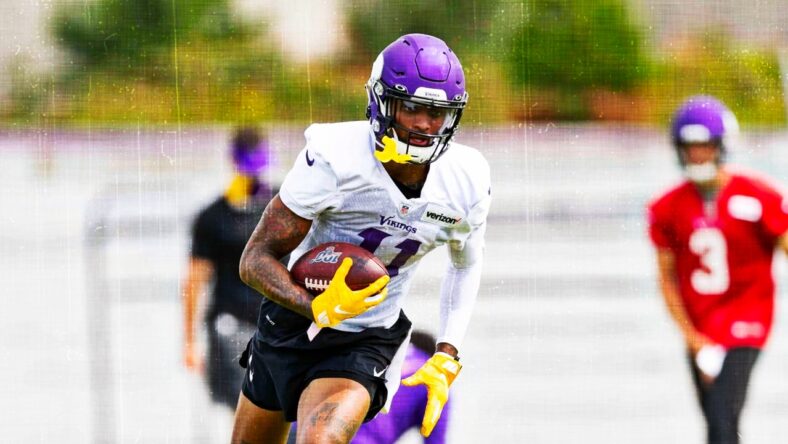 The San Francisco 49ers are 4-4 in 2022 and would visit U.S. Bank Stadium for a postseason game if the playoffs started today.

Sharpe played one season in Minnesota and has become a journeyman since. He’ll join San Francisco’s practice squad.

The Massachusetts alumnus joined the Vikings at a time when Minnesota desperately craved a productive WR3. The Vikings were top-heavy at the position, transitioning away from Stefon Diggs into Justin Jefferson, and a verdict was not yet known on Jefferson’s eventual superstardom. Sharpe was signed to outfit a WR corps with Adam Thielen, Jefferson, and then-rookie Olabisi Johnson.

The result was a quiet nothingburger.

Sharpe played in four games for Minnesota, was targeted three times, and caught zero passes. In the end, he wound up on the ash heap of Vikings WR3 hopefuls, embarking elsewhere after a one-year stint.

Then in 2021, Sharpe landed with Kansas City Chiefs for a virtually nonexistent tenure and the Atlanta Falcons after that. In Atlanta, Sharpe grabbed 25 catches for 230 yards in Matt Ryan’s final season with the club.

Sharpe’s best days were during the first three seasons (2016, 2018, 2019), catching passes from Marcus Mariota in Tennessee. With the Titans, he snatched 92 receptions for 1,397 yards and eight touchdowns in three seasons. All told, he’s played for the Titans, Vikings, Chiefs, Falcons, Bears, and now 49ers.

If the 49ers finish in first place out in the NFC West this season, they’ll play the Vikings at U.S. Bank Stadium in 2023. Otherwise, the two teams will meet for sure in Minneapolis in 2024.