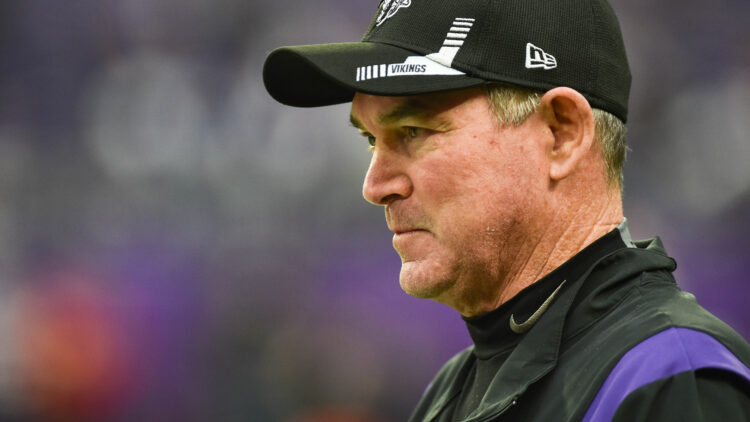 Mike Zimmer left the Vikings on January 10th after the Minnesota Vikings finished 15-18 (.454) in his final two seasons as head coach.

And since then, he can’t catch a break from stories painting his regime in a negative light.

Zimmer was revered in 2017 when the Vikings unexpectedly raced to the NFC Championship, and some even applauded his scheming of a 2019 playoff win versus the New Orleans Saints. But, on the whole, reports amid the aftermath of Zimmer are unflattering, characterizing the 66-year-old as stubborn, disharmonious, and difficult to work with.

Such stories came to a head this week when Tyler Dunne from GoLongTD.com sourced an anonymous former coordinator under Zimmer. That nameless person forecasts the Vikings for “immediate success” in 2022 without the former head coach because, “The devil’s gone. Satan is out of the building,” he said, referring to Zimmer.

Harsh words indeed, it is unclear if the former unnamed coordinator was using hyperbole or had an ax to grind with Zimmer — probably the latter.

While Zimmer assuredly wasn’t the devil, the Vikings are banking on 2022’s success with Zimmer as the sole and soul culprit of 2020 and 2021 shortcomings. Otherwise, the new leadership duo of Kwesi Adofo-Mensah and Kevin O’Connell would’ve torn down the roster and started from scratch.

But they didn’t do that.

Instead, Adofo-Mensah evaluated the team’s two big-money positions and players — Kirk Cousins and Danielle Hunter — recommitted to both and opted for a “run it back” approach. Adofo-Mensah also welcomed new free agents Za’Darius Smith, Jordan Hicks, Harrison Phillips, Chandon Sullivan, and Chris Reed while drafting 10 new players in April. Then, the executive went on a trading spree in the last two weeks, onboarding Nick Mullens, Ross Blacklock, and Jalen Reagor.

Overall, the roster has been tweaked — not fundamentally rebuilt — and O’Connell will try his brand of coaching, holding hope that players respond with more wins. Because, again, if the roster was the problem, Adofo-Mensah had every greenlight to start over.

Zimmer now serves as an analyst for the Jackson State Tigers. He reunited with his lifelong pal Deion Sanders at the collegiate level in Mississippi. He may be biding time for a return to the NFL in 2023.

Still, in eight months since he left the Vikings, he cannot find reprieve in the court of public opinion, especially with the Satan reference. But, hey, he was emphatically correct about Kellen Mond. Wyatt Davis, too.