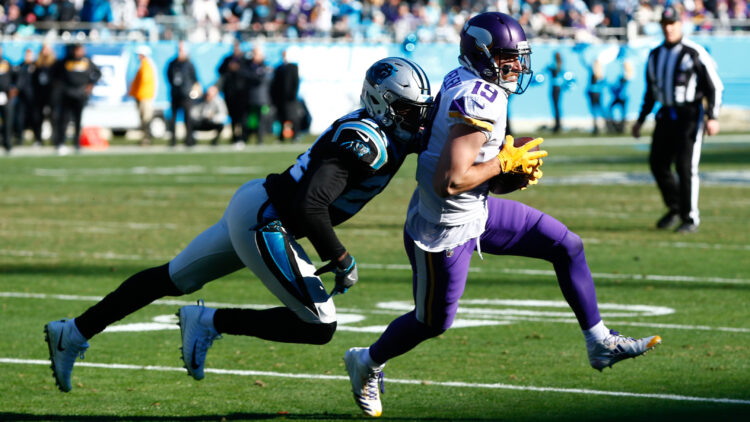 Sitting atop the NFC North, even after a disappointing defeat at the Philadelphia Eagles, the Minnesota Vikings are 1-1 with the Detroit Lions coming to town.

And ESPN has some advice for Minnesota — get the ball to Adam Thielen.

ESPN released its Week 3 power rankings on Tuesday, detailing one “big adjustment” each team should make through two weeks of regular season action. For the Vikings, it was fairly simple with the Thielen recommendation.

Kevin Seifert wrote about the Vikings necessary adjustment, “One of the more curious aspects of the Vikings’ season is the relatively low involvement of receiver Adam Thielen. He took a clear back seat to teammate Justin Jefferson in Week 1, but even when Jefferson was slowed Monday night by the Eagles, Vikings quarterback Kirk Cousins looked elsewhere.”

Indeed, Jefferson has emerged as a beyond-the-shadow-of-a-doubt WR1, curiously disqualifying Thielen from meaningful targets in 2022. But it doesn’t have to be that way.

Seifert continued, “If defenses focus on Jefferson, Thielen needs to be a more prominent option.”

Thielen has been criminally undertargeted in games versus the Packers and Eagles. Folks just didn’t care after Week 1 because the Vikings thumped the Packers, and who can complain about that? Still, as Minnesota’s offense succumbed to early-season mortality in Philadelphia, “back to the drawing board” is a popular topic in the Vikings community. Involving Thielen more frequently feels like a no-brainer.

To date in 2022, in Quarters 1 thru 3, Thielen has been targeted three times in the first two games. Three measly times. He wound up leading the Vikings in receiving yards after the loss to Philadelphia (52 yards), but that stat was hollow as Thielen did the damage in the 4th Quarter via “garbage time.”

Thielen is the NFL’s 66th-most targeted player through two weeks. And nobody understands it. Last year at this time, he ranked 21st in targets (17) through two games and was only two behind Jefferson (19).

And with Detroit’s 30th-ranked defense (per EPA/Play) rolling into Minneapolis this weekend, it’s a safe bet to assume Thielen won’t be ignored anymore.

Overall, ESPN wasn’t doom and gloom about the Vikings through two games, though. It ranked Minnesota as the NFL’s 11th-best team, even with the lifeless loss to the Eagles.