Vikings RB Could Be Positioned for Even Bigger Breakout 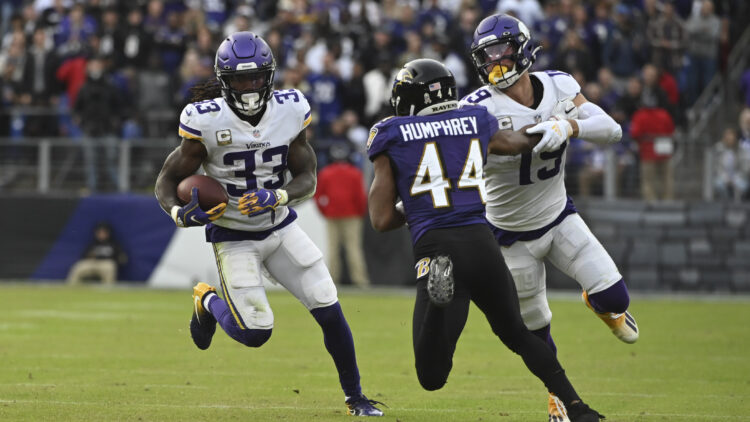 How does a three-time Pro Bowler with three straight 1,000-yard rushing seasons under his belt line up for a breakout year? Well, how about an offensive-minded head coach that gets him in more space. What if the Vikings RB Dalvin Cook sees a career year in 2022?

Last season, Dalvin Cook ran for 1,159 yards under the Mike Zimmer-led Minnesota Vikings. That was a slight step backward from his 1,557 yards the season before. He did play in just 13 games last season, after playing in 14 the year prior, but has never made it through a complete campaign healthy. His carries have remained pretty consistent the past three seasons, with the outlier being 2020, in which he topped 300, but that’s not where I’m looking for more production to come from in the season ahead.

Cook recently sent out a tweet, without a caption, in which he’s seen beating Pittsburgh Steelers linebacker Marcus Allen on a receiving route and getting into the secondary. He also has switched back to his college number, four, worn while he was a dominant force for the Florida State Seminoles. I don’t think any of that is entirely linked, but there’s reason to believe an elite athlete is feeling himself a bit under a coach that’s likely salivating at opportunities to get him the football.

Catching just 34 passes last season, Cook saw a career-low in receiving opportunities. He turned the receptions into just 224 yards, a 6.6 yards per reception tally. In 2019, when Cooks saw virtually the same amount of carries as in 2021, he put up a 53-catch season and added 519 yards to his total through the air. As a dynamic back, it’s always been evident that his hands were an asset, and he could get open in space.

Although the Vikings have done impressive work to revamp their offensive line for signal-caller Kirk Cousins, it remains to be seen whether slamming Cook up the middle is a healthy plan of attack. His speed and burst are among the best at the position, and getting him to the edge where he can run in space has always proven advantageous.

Last season Kevin O’Connell had a much lesser talent in Darrell Henderson at his disposal. Still, The Los Angeles Rams offense wasn’t content getting him his carries solely out of the backfield. Henderson saw 40 targets through the air and was able to turn the opportunity into 29 receptions. Given Cook’s skillset, it’s fair to assume a similar process will yield better results for Minnesota.

There was an opportunity for Kwesi Adofo-Mensah to nab a top wide receiver with the 12th overall pick before Minnesota traded back. That would’ve pushed K.J. Osborn down the depth chart and probably ate into Cook’s opportunities as well. Instead, the advice of wide receivers coach Keenan McCardell was heeded, and the Vikings looked elsewhere for their talent infusion.

It should probably be jarring how different Minnesota’s offense looks in the year ahead. It became antiquated under Zimmer and failed to utilize a set of skill position players that may be among the best in football. There’s no doubt O’Connell will have plenty drawn up for star receivers Justin Jefferson and Adam Thielen, but turning Cook into a quasi-wide receiver could pay dividends.

Maybe that tweet was nothing, but I’d imagine Dalvin is ready to roll with the ball in his hands in whatever way possible.