Checking In on Vikings Madden Ratings 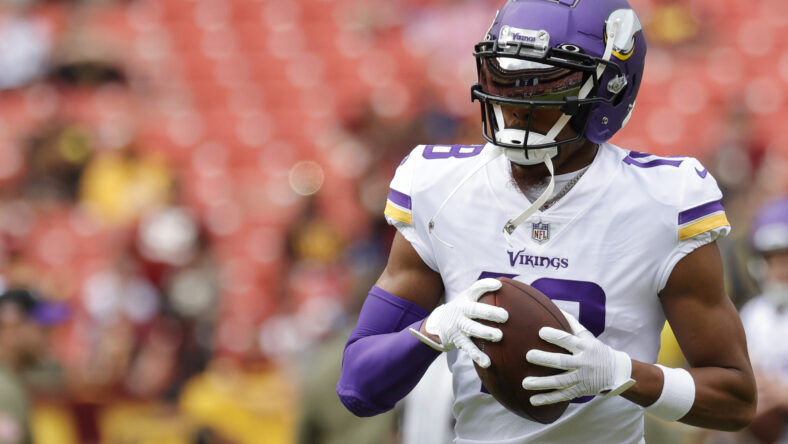 Through eight games, the Minnesota Vikings have been the second-best team in football, at least according to their record. No team has gone undefeated outside of the Philadelphia Eagles, and regardless of the path to get there, it’s clear there’s talent on Kevin O’Connell’s squad. How has EA Sports reflected that in their weekly updates?

To date, Dalvin Cook remains the highest-rated player on the Minnesota Vikings. The running back has had a solid season in terms of league comparison, but it hasn’t precisely been eyebrow-raising compared to his standards. His yards per game are near a career low, and he’s never done less per game through the air. Cook’s five touchdowns on the ground are just one off from where he finished 2021, but there’s plenty of meat left on the bone. He recently earned a one-point bump to 94 overall (which was where he was at launch). That makes him 4th overall among running backs, behind only Nick Chubb, Derrick Henry, and Christian McCaffrey.

Sharing the team lead alongside Cook is Justin Jefferson. This seems a bit light, given he’s at 94 overall and has earned only a single-point bump since the season started. Jefferson was among the best wide receivers in the NFL last season and trails only Tyreek Hill for yards this year. He was game-planned out of two early weeks to suppress his total, but it’s beyond clear he could be inching closer to 99 overall than he currently is. Las Vegas Raiders wideout Davante Adams is the only player at the position with a 99 overall grade. Cooper Kupp, Tyreek Hill, DeAndre Hopkins, and Stefon Diggs check in ahead of Jefferson.

Recently acquired tight end T.J. Hockenson immediately vaults up the Vikings leaderboard. With his 89 overall rating, he’s Minnesota’s fourth-best player behind only the aforementioned pair and Harrison Smith. Veteran WR Adam Thielen has dropped to 87 overall, a point lower than he started the season. Clearly, he’s not the same talent, but he’s still a very useful piece in this offense.

The beast known as Za’Darius Smith is currently second in the NFL with 8.5 sacks. He came into the year as a question mark missing last season with Green Bay due to injury. He’s continued to gain rating points and is now up to an 87 overall, which ranks fourth among right outside linebackers. Micah Parsons, Khalil Mack, and the Jaguars Josh Allen are the only players boasting higher marks.

Some of the Vikings bigger gainers in recent weeks include Patrick Peterson and Christian Darrisaw. Each recently received two-point bumps to the overall ratings. Peterson has done a solid job as a veteran leader for the secondary, especially in the revenge game against Arizona. Darrisaw looks like an All-Pro bookend that Minnesota could use as an anchor for years to come.

Unfortunately, Greg Joseph and Ed Ingram represent a pair of notable guys sliding backward. Both have lost rating points, and while Joseph did nail the game-winning field goal against Washington, his struggles have been evident this season. Ingram is still working to acclimate as a guard at the NFL level, but there’s promise he could continue to develop down the stretch.

Yearly, Madden is careful to avoid big swings following only small sample sizes, but the Vikings continued success should help this team to be seen in a more positive light. It will be interesting to see where things wind up when the dust settles in the regular season.