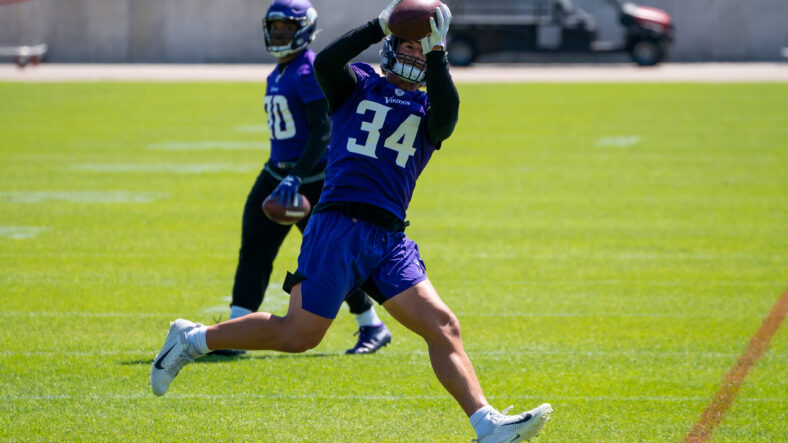 That didn’t take long. The Minnesota Vikings released Jake Bargas on Tuesday after a wave of five roster cuts mandated by the NFL.

On Sunday, the Vikings secondary rival, the Chicago Bears, signed the fullback to a one-year deal.

Bargas, 25, spent two seasons with the Vikings, mainly as a practice squad member. He did, however, play a handful of regular season snaps in Minnesota — in 2020 versus the New Orleans Saints on Christmas Day and last year against the Lions in a road loss.

Discovered as an undrafted free agent from North Carolina following the 2020 NFL Draft, Bargas was usually the Vikings “second fullback” behind C.J. Ham. As a Tarheel from 2016 to 2019, Bargas played tight end, so it is unclear if the Bears will embrace him as a fullback or tight end.

The Bargas-to-Bears news hits as Vikings fans wonder about the fate of their own fullback, C.J. Ham. The longtime Viking seems to be on track for a 53-man roster spot, but Ham curiously wasn’t implemented much in the final days of training camp, Kevin O’Connell’s offense doesn’t prominently feature fullbacks, and the team could be “forced” to keep five RBs and FBs on the active roster. And the latter would be considered overkill by some.

At North Carolina, Bargas was a TE target for current Pittsburgh Steelers quarterback Mitchell Trubisky. In addition to Bargas and Blasingame, Chicago also has Dakota Dozier, DeMarquis Gates, Riley Reiff, Trevor Siemian, and Tajae Sharpe on the roster as ex-Vikings.

The Vikings take on the Bears in Week 5 at U.S. Bank Stadium.