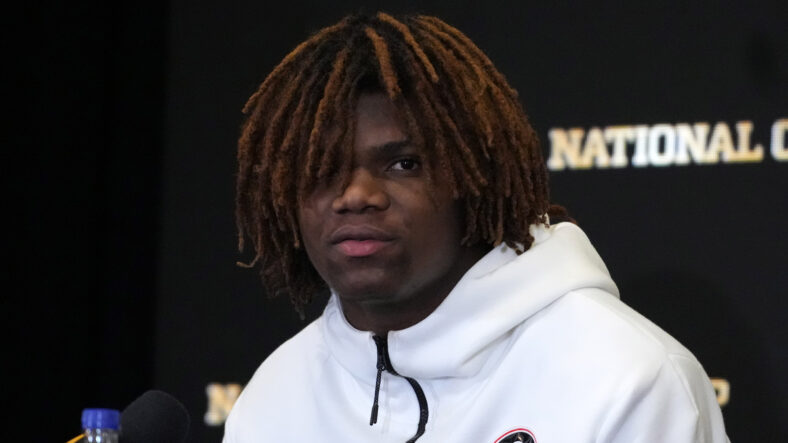 The Minnesota Vikings survived the Detroit Lions in Week 3 at U.S. Bank Stadium, 28-24, and rookie Lewis Cine posted to Twitter about it thereafter.

While other players like Justin Jefferson commended the team win on social media, Cine tweeted a photo of himself — either looking mad, sad, determined, or all of the above — with a caption of “Time Will Tell.”

Cine played 15 special teams snaps against the Lions after playing that same amount on special teams in a Week 2 loss at Philadelphia. The difference between the games, though, was Harrison Smith. Minnesota was without Smith in Week 3 (concussion protocol), naturally nominating Cine as the “next man up.”

But Minnesota opted for Josh Metellus’ services instead.

And Metellus did not disappoint — not by a longshot. In fact, Metellus is the Vikings best player through three games, according to Pro Football Focus, if that can be believed. His 82.6 PFF score leads the way as the team travels to London for a Week 4 date with the New Orleans Saints.

It is unclear when the pivot of priority will transfer from Metellus to Cine, if at all, in 2022. Yet, the odd nature of Cine’s tweet is undeniable. Why is it odd? Timing and optics.

Had Cine tweeted the exact caption and photo on a random afternoon in August, nobody would care. However, his team had just won a topsy-turvy game, he didn’t play, and he appears melancholy in the photo. Moreover, Cine was supposed to play per credible reporting, so the tweet generally reflects a wee bit of discontent.

In the end, Cine did not play, and his teammate — and by-default-competition — Metellus performed marvelously. If Cine were a 5th-Rounder hoping to make a name for himself, this topic would be moot. But Cine is 1st-Rounder, one the Vikings traded back 20 spots to land. The man should reasonably play in his rookie season, especially when the man he was drafted to replace (Harrison Smith) was injured. Last weekend was an organic segue for Cine to see the field on defense.

He did not — and now he’s posting weird tweets about it.

The Vikings defense ranks 30th in yards allowed to opponents through three games of 2022, so whenever Cine is ready to bring the 1st-Round heat, his presence will be welcomed.