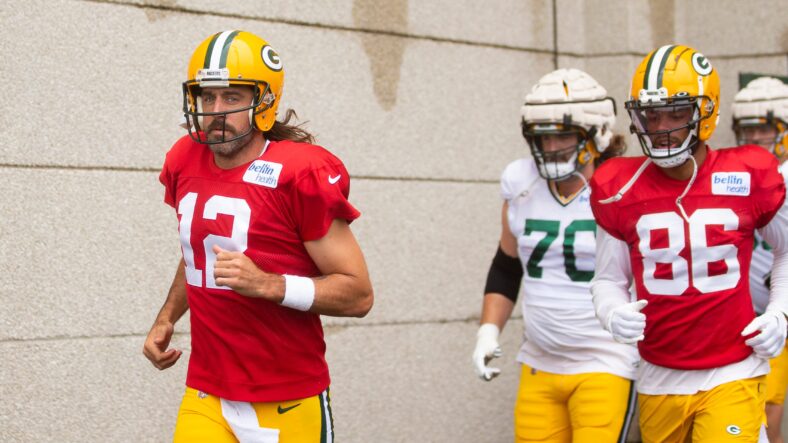 Packers quarterback Aaron Rodgers returns to Green Bay for an 18th season in 2022, and he sounds glad his division rival fired head coach Mike Zimmer in January. Rodgers is on record a few times complimenting Zimmer’s defense, illuminating its complexity as the Packers signal-caller plays the Vikings twice annually.

Rodgers is particularly impressed with Vikings safety Harrison Smith, who’s played against Rodgers’ Packers for 10 years. In an interview with Pardon My Take this week, Rodgers opined on the Vikings Zimmer-led defense, Eric Kendricks, Anthony Barr, and of course, Smith:

Mike Zimmer, for a long time, was as hard as it came playing against because they had A’d-up looks, you know, double A-gap and then double edges, and they had every variation. Both edge guys, four to a side, four to the other side, both inside guys, drop those guys out, and the best disguisers in the game including Harrison Smith, who’s been there forever, but when Barr and Kendricks were in there, and they had that front that played together for a long time. It was one of the toughest defenses to go against.

Last November, Rodgers also afforded Smith kudos on The Pat McAfee Show, “He’s definitely the total package. He’s the most difficult player to determine what he’s doing on any play.”

Smith, a six-time Pro Bowler and three-time All-Pro, is no stranger to praise for peers. In 2018, New England Patriots coach Bill Belichick compared Smith to Hall of Famers Ed Reed and Troy Polamalu, “He’s one of the best – you know, Smith, Ed Reed, Polamalu. Those guys are, I’d say, among the best. He’s certainly right there. He’s a hard guy to read.”

With Rodgers’ esteem for Smith, he still finds ways to shellack the Vikings. Green Bay is 16-10-1 (.611) against Minnesota with Rodgers at the helm. Plus, the Packers quarterback owns an ungodly 56-touchdown to 7-interception split versus the Vikings in his career, a nightmare for Vikings fans but Holy Grail for Packers enthusiasts.

For better or worse, the Vikings will get Rodgers’ Packers out of the gate in 2022, hosting Green Bay in Week 1 at U.S. Bank Stadium. The Vikings are showcasing a new 3-4 defense, a scheme used only once in franchise history — during a single season in the 1980s.

The Packers are favored by two points over the Vikings in that matchup.