3 Vikings Players to Watch vs. Dolphins 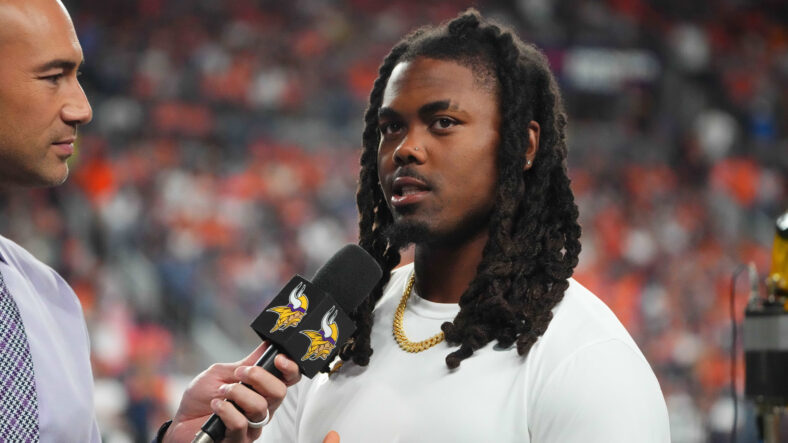 My selection of Vikings players to watch in Week 5 against the Chicago Bears all played an integral role in the Vikings fourth win of the season. Hopefully, it’s the same story this week as the Vikings head down to Miami for their third road game.

They are searching for a fifth win in their opening six games before heading into a Week 7 bye. If Minnesota is to win, here are three Vikings players to watch who I think have a significant role.

We start with WR3.

Injuries to key players aren’t helping them. Byron Jones is on the PUP list and is out of Sunday’s game. Their other star cornerback is Xavien Howard, and he missed last week’s game with a groin injury. Howard could only participate in light practice on Wednesday and Thursday. We will find out later in the week if he’s healthy enough to suit up.

Even if he does, this is an opportunity for the Vikings to break out some dynamic big plays. Of course, Justin Jefferson will lead the way, but there should be ample opportunity for the rest. I am mainly looking for some downfield targets for KJ Osborn akin to the two catches that sealed the victory over the Lions in Week 3.

The Dolphins might be down to their third-string quarterback in the shape of Skylar Thompson. However, with Tyreek Hill and Jaylen Waddle lining up at wide receiver, they can still cause the Vikings secondary plenty of problems. Hill has the raw speed to remain dangerous even if the Dolphins run a limited offense with a seventh-round rookie under center. Miami will move Hill around to try and maximize his effect on the game, but he primarily lines up on the right side, where he will be opposite Patrick Peterson.

The veteran cornerback will need to use all his experience to try and slow Hill down. Nobody in the NFL wants to be in a direct foot race with the Dolphins number 10 — let alone a 32-year-old veteran.

Peterson may not be the elite corner he once was, but he’s still doing a solid job for the Vikings on the perimeter. He draws a tough matchup this week and will probably need the help of his defensive front. Pressure on the quarterback up front will limit Hill’s involvement in the game.

That brings us nicely to the Vikings edge rushers. The Vikings need to smother the rookie quarterback and not allow him to feel comfortable. Of course, you have to allow for the pace of Hill, but the more pressure the Vikings get on the young quarterback, the less likely any deep plays down the field are going to develop.

Danielle Hunter and Za’Darius Smith will lead the attack on the quarterback. The next man up is DJ Wonnum, who has been as good as anyone on the edge for the Vikings this season. This space was considered for him alone initially, but after he turned up on the injury report with an illness on Thursday. I decided to be broader and talk about the whole group. Hopefully, Wonnum is ready to go, as his role is vital to ensure the Vikings aren’t over-reliant on their two star edge rushers.

He has 2.5 sacks and 5 QB hits in the opening five games. I would like to see plenty of packages that see Hunter, Smith, and Wonnum on the field together. Especially if the Dolphins starting left tackle, Terron Armstead, cannot play. He was listed as “did not practice” with a toe injury on Wednesday and Thursday’s injury reports. The Dolphins started the season with Austin Jackson at right tackle. However, an ankle injury in Week 1 landed him on injured reserve. He’s not due to return this week, meaning the Vikings potentially face two backup tackles. The Vikings edge rushers won’t get a better chance to feast this season.