VT Breakdown: Vikes Take Command of the NFC in Washington

The Vikings are 7-1 and tied for the second-best record in the league. Let me say again . . . the Vikings are . . . oh, never mind, just read it again. It’s not a misprint. With a 20-17 win over the Commanders in Washington, the Vikings are on a 6-game streak and they’ve all been one-score games. Last year they lost eight of those games. This is quite amazing to all those Purple fans and observers, so let’s get used to it. We need to embrace these tight-knit, one score games, because they are very good at winning them, and who knows if they will abate anytime soon.

By rights, the Vikings could have won this one a bit more easily. There was a bad no call in the endzone at the end of the first half that resulted in a turnover. There was a major misstep by a ref in the second half that took away a potential pick for Minnesota and resulted in an improbable touchdown for the Commanders. It turned the momentum and the team worked like heck on both sides of the ball to get it back. Hey ultimately deserved to win and as they have been doing for most of the season, have actually done so.

Kirk Cousins, in his return to D.C., looked great at times, underwhelming at others, and ultimately, stud-like in crunch time, making the plays they needed to win. Dalvin Cook, bottled up for most of the game, made one heck of a catch to tie the game up late. Justin Jefferson finally got in the endzone again. And T.J. Hockenson, who became a Viking on Tuesday, likely had the best debut for a tight end on a very short week in the history of the team. Fans, like the coaches were before they traded for him, are salivating at the potential he provides for this team.

There is no rest for the wicked, weary or even winners of games they almost didn’t, and the Vikings will travel to Buffalo next week to take on a Bills squad that is likely fairly ticked off after losing to the NY Jets on Sunday. Well, Joe Oberle from Vikings Territory and purplePTSD is joined by the Star Tribune’s Mark Craig to review the Washington game and preview the next one on the Vikings Territory Breakdown podcast. We might even spend some time playing Taps for the demise of that certain team located to the east of the Twin Cities. After 30 years of phenomenal quarterback play in Green Bay, perhaps it’s finally the middle heading to the end of that era. Tune in to the VT Breakdown pod and check it out and enjoy rehashing winning football.

Subscribe to Vikings Territory Breakdown on Apple Podcasts, Spotify, iHeart or wherever you get your podcasts! 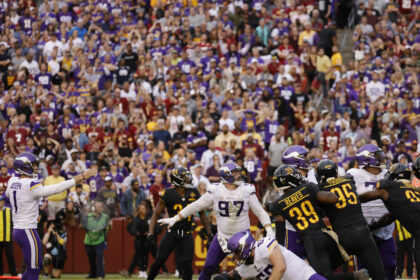