Why Did the Vikings Pass on Malik Willis? 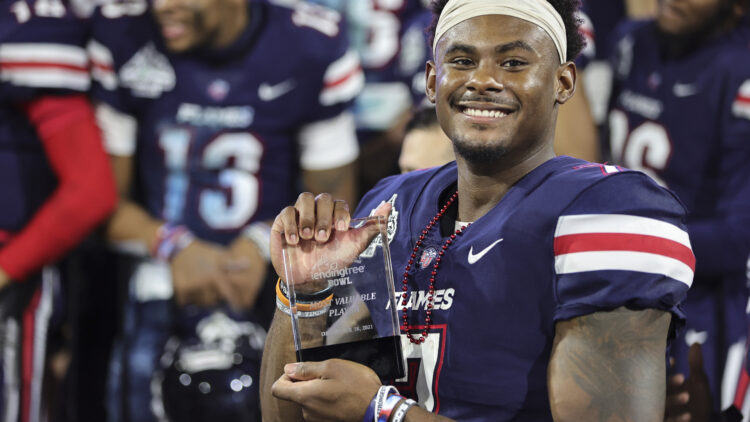 Despite being projected as a 1st round selection in the 2022 NFL Draft, Liberty quarterback Malik Willis was present in Las Vegas only to watch his name be passed over 85 times. The Minnesota Vikings had multiple opportunities but decided against adding the talented signal-caller. What happened here?

Earlier this offseason, Minnesota agreed to a contract extension with veteran Kirk Cousins. He’s now locked in as quarterback for the upcoming season.

In a cap adjusting move, Cousins settled on a guaranteed $35 million for 2022, but the dead cap money is virtually halved (though still substantial at $48 million) in 2023. The Vikings can keep him around next season at nearly the same number, or they could hand over the reins to a cheaper option. It doesn’t appear that the new regime has any intention of going down that path.

When Minnesota traded back to the 32nd pick, they represented the last opportunity for a player to be selected with a 5th-year option. It seems logical that you may want to grab your quarterback of the future there, but the 5th year option is also being considered less of a positive than it was previously.

That left plenty of intrigue surrounding Willis when Minnesota was on the clock at 34. Tampa Bay has Tom Brady under center, but they’ll eventually need his replacement. Willis could’ve been that guy, but using high draft capital on an unnecessary position when trying to win now may have been a reach. Multiple reports suggested that the Vikings had a legitimate interest in Willis with their first day two pick, but it didn’t materialize. Then, it didn’t again when they selected Ed Ingram and Brian Asamoah.

So, the writing appears to be on the wall, and that writing is indicative of a Vikings team that may be as interested in Kirk Cousins finishing his career here as he is. Right now, the only other rostered quarterbacks for Minnesota include Sean Mannion and Kellen Mond. The former is a battle-tested veteran that has flopped in limited opportunities. The latter is an untested second-year talent that Mike Zimmer had all but cast aside.

There’s really no telling how the new coaching staff will push the backup competition or what the development of Mond will look like in year two. That said, neither option was upgraded, and despite an opportunity to move on from Cousins next season, there’s nothing to indicate that will happen.

While Willis is a fine talent, there are plenty of reasons to understand his free fall. Playing at a lower-tier school in Liberty, his level of competition was hardly that of what he’d see on Sundays. That could’ve represented an ideal learning opportunity behind a veteran like Cousins, or it could indicate a player with over-inflated production that may never live up to starting caliber.

There’s also the realization that it isn’t just Willis the Vikings passed on. Sure, Kenny Pickett was taken by the hometown Steelers in round one, but quarterbacks found themselves out in the cold throughout this draft. It was seen as a week class, and that definitely was the case, while Matt Corrall, Sam Howell, and others were put on the backburner by plenty of teams needing help at the position.

Maybe Willis will be a capable NFL starter in a season or two. Perhaps he takes the league by storm. Both of those remain question marks, though, and there’s no question that Minnesota opted for the guy who has produced at a high level already and found no reason to invite a controversy onto their roster.