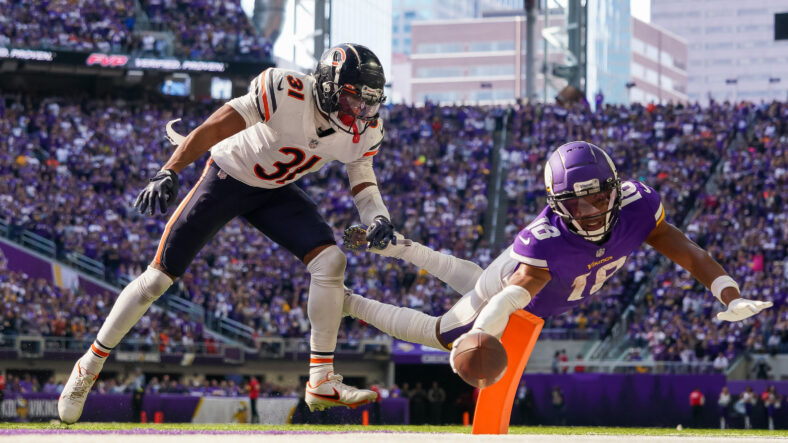 The Minnesota Vikings are on bye this week, and so are many of the most entertaining teams in the NFL. Even still, the show must go on, and thus, the picks go on. Last week was a return to Earth, going 3-4 in the Week 6 picks. Before we get into the Week 7 NFL picks, here’s a look back at the results from a week ago:

The Cardinals defense has been sneaky good so far this season as they’ve allowed just 19.6 points per game since the 44-21 shellacking handed to them by the Kansas City Chiefs in Week 1. Even still, they’ve won just two games, and one of them was the miracle OT victory over the now 1-4 Raiders.

Meanwhile, the Saints have consistently stumbled all over themselves down the stretch of games. While Andy Dalton has been a solid game-manager for the offense, the lack of star power around him could very easily result in another loss. I can’t bring myself to pick either one of these teams to win a game right now, so just expect another low-scoring affair on Thursday.

This is already the second matchup between these two teams as they met once before in Week 4. The Tennessee Titans won that game 24-17 in Indianapolis, but since then, Indy has been much improved. The Colts won back-to-back games in Weeks 5 and 6, and they did so in completely opposite ways.

In Week 5 against the Denver Broncos, they relied on their defense to win 12-9 on primetime. Then in Week 6, Matt Ryan led a shootout 34-27 victory over the Jacksonville Jaguars.That said, Indy’s offense has been completely incapable on the road. In three games away from Lucas Oil Stadium, they’ve scored a total of 32 points.

Meanwhile, the Tennessee Titans have completely turned things around after an 0-2 start. They won three straight games going into their bye week, largely putting their success on the wide shoulders of Derrick Henry. In those three wins, Henry has averaged 140 yards from scrimmage per game and scored four TDs. Considering Tennessee is at home and coming off their bye, I’m taking the Titans to continue their winning streak.

The Green Bay Packers have had seemingly “easy” games on their schedule before and blown it. That said, it’s hard to believe that the Packers can’t handily win this game.

The Commanders lost Carson Wentz to a broken finger for at least a month, so Taylor Heinicke steps in as the starting QB for this game. The Packers pass rush should have a field day against Washington’s offensive line, which has allowed 23 sacks so far this season.

Green Bay’s offense has been bad through six weeks, but Washington has failed to stop anyone other than the Chicago Bears, allowing 25.6 points per game in the other five games. I struggle to believe things in Green Bay are quite that dysfunctional, so give me the Packers to win this game.

Obviously, last week’s loss to the Atlanta Falcons was ugly for the 49ers. However, they were missing many key pieces, including DE Nick Bosa and LT Trent Williams. Both these players, along with safety Jimmie Ward, are trending towards playing this game.

The Chiefs offense has struggled a bit in games where they cannot get the running game goint, too. They are 1-2 in games where they rush for under 100 yards. The Niners defense has allowed fewer than 100 rushing yards in four of six games this year, going 3-1 in such games.

Patrick Mahomes and the Chiefs offense will put up some points, but this game seems like it’ll be closer than many seem to believe, especially being played in the Bay Area.

Back-to-back NFC West picks, surely that will end well. At any rate, the Chargers have given us very little reason to believe that they can close out games against any competent NFL teams.

As much as we wanted to hand Seattle a top-five pick, it appears that they are exactly that. Geno Smith has taken the reins of this Seahawks offense and become a top-10 passer in the league. In this dual of QBs against bad defenses, there will surely be points on the board. If Seahawks fans make the trip down the coast for this game, there’s a good chance we see a big upset in SoFi.