There are plenty of narratives coming into the Minnesota Vikings second matchup against the Detroit Lions this year. One seemingly flying under the radar concerns Vikings star wideout, Justin Jefferson. Looking to reverse his worst game of the year, there’s no better time than the present.

After Kevin O’Connell started his coaching career off with an emphatic win during Week 1 against the Green Bay Packers, Philadelphia humbled the Vikings on the road. Despite a 28-24 home win against the Lions in Week 3, Justin Jefferson was non-existent. He was targeted just six times in the passing game and hauled in three receptions for a measly 14 yards.

At no point this season has Jefferson rivaled that low level of production, but now trailing Miami Dolphins Tyreek Hill by 102 yards for the NFL lead, he has plenty of ground to make up. Although the Vikings pass defense is among the worst in the league, Detroit is right there with them. This contest should be expected to look like a shootout, and O’Connell must be prepared to have his offense air it out.

Jefferson has posted more than his fair share of 100-yard games this season but has put up back-to-back stinkers just once. Coming off a 45-yard performance against the New York Jets, you can bet he’d like to expand upon the yardage total in a big way. It’s hard to be disappointed with his output against a good Jets defense, and he did find the end zone, but more often than not this season Jefferson has been a volume play.

Minnesota can’t enter Ford Field thinking they’re going to win this one by grinding down the Lions, and they’ll need to give their own defense plenty of breathing room. The Vikings trailed 24-14 against the Lions at home entering the 4th quarter in Week 3, and that type of deficit may be insurmountable on the road. Despite Kirk Cousins showing an ability to lead comebacks and game winning drives this season, this is a game where that should be seen as more of a bug than a feature.

With Dalvin Cook largely held in check this season, and Adam Thielen fully settled into a more secondary role, Jefferson will have to rise above consistent coverage and make the plays he’s grown accustomed to calling routine. T.J. Hockenson is going to be licking his chops playing his former team, but it may be Jefferson that stands more to gain this season by getting his own version of revenge. 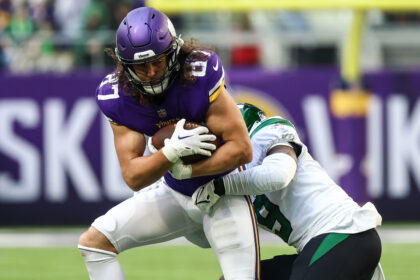 Also Read:
So, about That Hockenson Revenge Game..