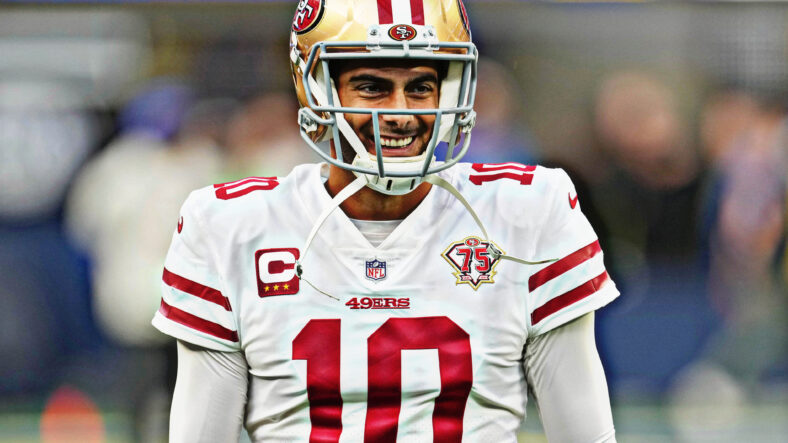 Baker Mayfield was swapped to the Carolina Panthers on Wednesday for a conditional 5th-Round pick, leaving San Francisco 49ers quarterback Jimmy Garoppolo as the “last man standing” in the league’s annual quarterback carousel.

Garoppolo is recovering from a shoulder injury this offseason and waiting on a verdict for his September standing. He could be traded — a realization even vocally confirmed by 49ers head coach Kyle Shanahan — or surprisingly retained as San Francisco’s QB1 if second-year passer Trey Lance stumbles this summer.

If Garoppolo is traded, the Minnesota Vikings could see him at least twice annually, according to CBS Sports. Cody Benjamin authored an article on Thursday outlining five logical destinations for the 30-year-old. And one of those teams is the Chicago Bears, the Vikings secondary rival behind the Green Bay Packers.

Of course, the Bears already employ Justin Fields, who hopes for a sophomore renaissance in 2022. Fields’ rookie season was underwhelming, but the adventure was also led by head coach Matt Nagy who was fired in January. Fields will get a crack at stardom with new skipper Matt Eberflus in charge.

On Chicago as a potential landing spot for Garoppolo, Benjamin explained, “The Bears say they’re all in on 2021 first-rounder Justin Fields, but the new regime doesn’t seem particularly interested in giving him a supporting cast with which to grow in 2022.”

Although the merger of Garoppolo and the Bears is unlikely on the whole, Chicago is not a stranger to a crowded quarterback depth chart. Heading into last season, the Bears rostered Fields, Andy Dalton, and Nick Foles — all quarterbacks who could make a case for a starting job, especially with the Bears. The year before, 2020, Chicago embraced an honest-to-goodness battle between Mitchell Trubisky and Nick Foles, resulting in a playoff appearance on Nickelodeon.

The Bears have been here before with multiple mid-tier quarterbacks.

For 2022, Chicago will support Fields with a QB2 familiar to the Vikings, Trevor Siemian. And Benjamin mentioned him, too, “Their veteran No. 2, meanwhile, is ex-Saints backup Trevor Siemian, who’s struggled to stay healthy even off the bench, and is due just $1.6 million in 2022. Adding Garoppolo, either via trade after a pay cut or following a release from San Francisco, would give Chicago more proven insurance.”

In that regard, there’s a chance the Bears could view Garoppolo as a better option going forward than Fields. Or — a hedge to the bet of Fields again performing poorly as he did during his maiden voyage.

Other teams mentioned in The Garoppolo Sweepstakes?

Seattle should be considered the frontrunner as it is the only team in the NFL with a “maybe” solution in July at quarterback with Drew Lock. On the other hand, it might be odd for San Francisco to trade Garoppolo to a division rival.

Garoppolo was the NFL’s fourth-best quarterback in 2021 per EPA+CPOE, a quarterback efficiency metric.