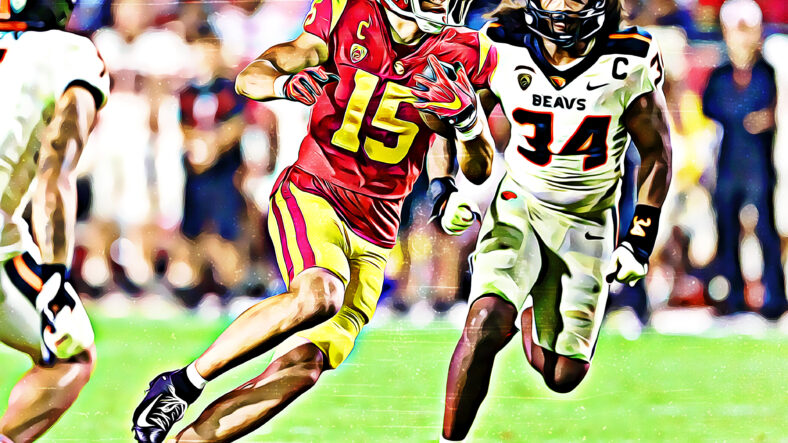 Still, a few Vikings fans and NFL pundits haven’t ruled out a WR pick for the franchise with the 12th overall pick in this month’s draft.

If general manager Kwesi Adofo-Mensah “shocks the world” and pulls off a 1998 maneuver of drafting a wideout when the team is set at the position, it may not be USC’s Drake London.

London is a Top 15 prospect in the 2022 NFL Draft, sometimes even landing in the Top 8. He’s often compared to Denver’s Courtland Sutton or a less-explosive Julio Jones — pretty commendable company.

Of course, the Vikings apparent absence at London’s Pro Day doesn’t mean they dislike the player. But if he were on Adofo-Mensah’s radar for Round 1, a representative from Minnesota would probably be in attendance. Most teams had a presence at the event.

London snagged 1,084 receiving yards in 2021 en route to seven touchdown receptions in 2021 at USC. Along with Garrett Wilson, Jameson Williams, and Chris Olave, London is considered a “sure thing” commodity in the draft.

Interestingly, the school most frequently tapped by the Vikings in the 1st Round throughout franchise history is USC. Minnesota has used the 1st Round for Trojans five times:

Notably and recently, the Vikings found EDGE rusher Everson Griffen in the 2010 NFL Draft, and he paid massive dividends for the Vikings in 11 seasons.

London is lauded for his size. among other attributes. He’s 6’5′ and 210 pounds.