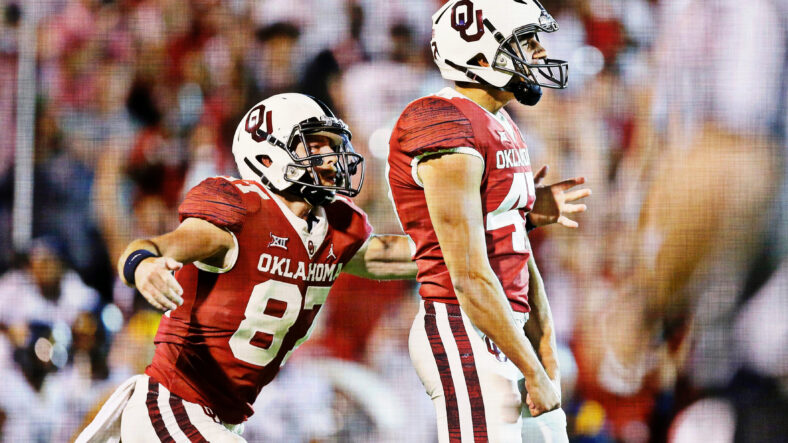 Gabe Brkic (47) continues to carve out a spot among the best kickers in OU history. Lx13732.

The franchise reportedly signed a rookie kicker on Thursday, ensuring at least some competition for Joseph, who endured a topsy-turvy (but mostly good) season in 2021.

His name is Gabe Brkic, and he attended the University of Oklahoma.

The noteworthy part from Jalen Ross of the Sooner Scoop is the length of the deal. Three years is a noteworthy commitment. Before the Ross tweet, the working theory was that Joseph would be the Vikings kicker for 2022 and perhaps beyond.

The addition of Brkic modifies that forecast.

Since the dawn of the Mike Zimmer era in 2014, the Vikings were the NFL’s second-worst franchise for extra-point accuracy. Brkic, on the other hand, is a savant with extra points. He converted 159 of 160 extra points at Oklahoma. For an ordinary franchise, that’s no big deal. With Vikings fans, it’s a Holy Grail of sorts.

Brkic was also a Lou Groza Award finalist. He connected on 82.6 % of his field goals for the Sooners, even drilling five out of seven from 50+ yards.

To date, his career-long is 56 yards, so the man has oomph — like Joseph, the incumbent.

Kickers are a big deal for Vikings fans, as the franchise hasn’t truly nailed one down long-term since the good part of Blair Walsh. In January 2016, however, Walsh unraveled at a terrible time, missing a playoff-round-advancing field goal in the 2015 NFC Wildcard game. He never recovered.

During life after Walsh, Minnesota auditioned Kai Forbath, Daniel Carlson, Dan Bailey, and Joseph. All men had moments of competence but were undone by inconsistency.

The verdict is out on Joseph, but the Brkic signing indicates general manager Kwesi Adofo-Mensah may be interested in a fresh option.