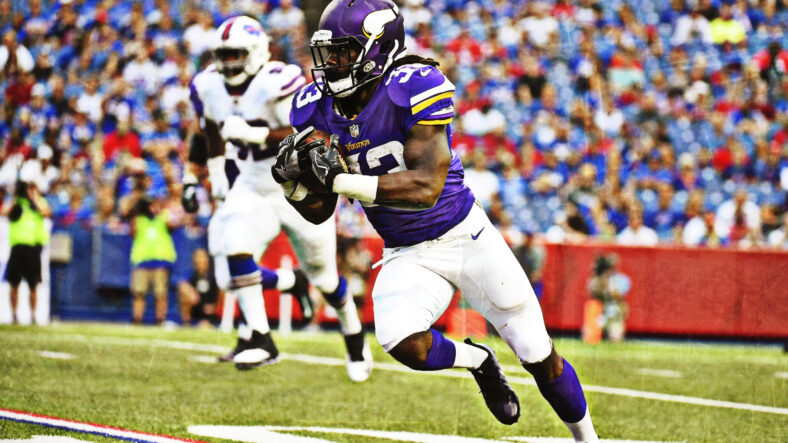 In the 2nd Round of the 2022 NFL Draft, the Buffalo Bills selected running back James Cook from the University of Georgia. The Bills have been plagued by ho-hum RB performance for a few years, so the selection of Cook figures to end the mediocrity.

The Vikings will get a peek at Cook in Week 10 of the 2022 season. And when they do, his style should look pretty familiar.

The Vikings Cook is very aware of the date with his brother in November. On the Vikings Circle, a YouTube show, the elder Cook acknowledged he’d be happy if his brother scored against the Vikings. But on the whole, Dalvin is interested in a win and some bragging rights, saying on the YouTube show, “When it all comes back to it, once we get home, once we get offseason or whatever it’s going to happen, we gotta to answer the bell to each other and we gotta have them bragging rights when we get back home in the household. And, you know, Big Cook trying to have them bragging rights.”

Cook enters Year Six with the Vikings and may experience a different role in 2022. Early clues suggest the Florida State alumnus could be used in a pass-catching capacity, a philosophy more in line with modern NFL offenses. Minnesota successfully utilized Cook as a pass-catcher in 2019 but veered away from the tendency when Kevin Stefanski left the team to coach the Cleveland Browns.

In the last three seasons, Cook ranks second in the NFL for yards from scrimmage, tallying 4,955 since 2019. And he trails the leader, Derrick Henry, by just 23 yards.

The other Cook in Buffalo will hope to make a thumbprint on the Bills offense immediately. As of late, quarterback Josh Allen accounts for much of the Bills rushing offense, an odd circumstance for a man who’s so talented at throwing the football. Finally finding a productive running back could reduce the workload for Allen. No matter how glorious a quarterback may be at running the football, the hits as a runner inevitably take a toll on a quarterback — and there’s really no precedent to state otherwise. Running quarterbacks seldom reach their mid-30s as productive starting QBs.

When the Vikings lock horns with the Bills — a road game for Minnesota, by the way — it will be the most challenging game of the season for O’Connell’s team. Barring injury, the Bills are seemingly guaranteed to be Super Bowl contenders according to recent playoff performance and the construction of their depth chart. From top to bottom, the Bills roster is wildly impressive.

And when Dalvin Cook looks over at the other sideline on that Sunday afternoon, he’ll be thinking about getting a win and some family bragging rights.