Vikings Players’ Reactions to Win No. 10

The Minnesota Vikings got into double figures in the win column for the 2022 season, with a 27-22 win over the New York Jets. Despite getting out to 20-3 lead, it was another battle that went down to the wire. In a game that encapsulated this Vikings season, Minnesota found a way to win at the death once again..

With victory, the Vikings completed a sweep of the strong AFC East division and moved to a 10-2 record.

First-half rushing touchdowns from Dalvin Cook and Alexander Mattison got the Vikings rolling. After that, it was tough going for the Vikings offense, against a very good Jets defense. In the second half, the Vikings struggled to muster any offense apart from one drive that resulted in a Justin Jefferson touchdown. That score would prove to be decisive.

Patrick Peterson dedicated the win to the best fans in the world.

The Vikings have had a run of games against some seriously-physical and seriously-good defenses. Other than the Cowboys loss, the Vikings have found ways to win over Washington, Buffalo, New England, and now the Jets. During that period, quarterback Kirk Cousins has taken a lot of big hits. He was philosophical postgame, speaking of a mantra he has followed throughout his football career. “Tough times don’t last, tough people do.” Cousins durability and toughness can not be doubted.

When asked about his team’s quarterback, offensive lineman Brian O’Neill got x-rated in his praise.

KJ Osborn typified this Vikings team, with his engagement with fans and praise for the team. Emphasis on the word team.

Unfortunately, rookie cornerback Akayleb Evans left the game in the second half to be evaluated for a concussion. After missing the previous two games because of a concussion, this is worrisome news. Evans took to Twitter after the game and promised fans he is feeling good.

Camryn Bynum’s Turn to be the Closer

There is plenty you can criticize about the Vikings defense, but they have consistently stepped up in the fourth quarter. Peterson coined the phrase “closer,” which is a mantra this defense is living by. Time and time again, the Vikings defense is finding ways to close out games. The best part about it is that different players are stepping up each week. This time, it was Camryn Bynum’s turn.

Finally, a video of the players heading back to the locker room in celebration.

Your Minnesota Vikings are now 10-2 and travel to Detroit next week knowing victory seals the division. 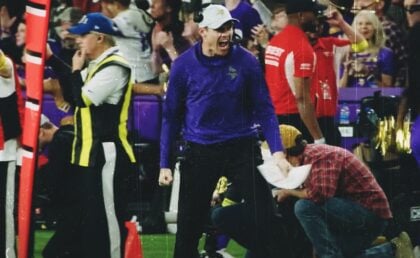