Vikings Ownership Remit for 2022 Was Clear from Day 1 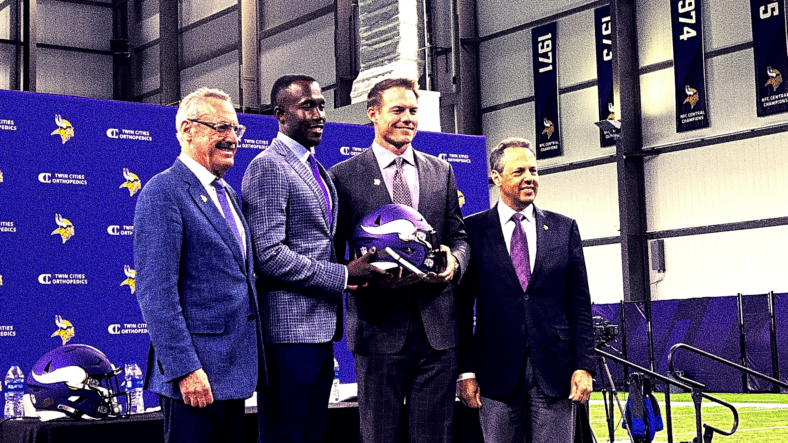 The idea the Minnesota Vikings were going to tear it all down and start the process of a complete rebuild has puzzled some fans over the last couple of months (and it wasn’t necessarily a bad idea).In fact, there is plenty of merit in going in that direction. There was always one major problem with that scenario, though.

The Vikings ownership remit for this season was clear from Day 1. I don’t know if people have forgotten or chosen to ignore it in favor of hoping for their preferred scenarios. Go back to Mark Wilf’s press conference at the beginning of the general manager and head coach search. The message was clear.

That message has never changed. Ownership expects the team to be competitive this year. There is a want and a need for some significant changes in the Minnesota Vikings organization. However, the Wilf family has no desire to risk putting out a team that struggles to win three games a season and have fans lose interest. They want butts on seats at US Bank Stadium to keep the cash flowing in. Tearing it up and starting again has no guarantee of bringing success.

The Vikings could just as easily find themselves rooted to the foot of the NFC North for several years. Even those shouting loudest for the rebuild would soon lose patience. That is the worst-case scenario for ownership and not something they want to risk.

Instead, Kwesi Adofo-Mensah and Kevin O’Connell are tasked with a much more difficult proposition. Change the organization’s culture and have a long-term plan for replacing the veteran players like Kirk Cousins, Adam Thielen, and Harrison Smith, and build a roster capable of winning the Super Bowl while juggling a difficult cap space situation — all while staying competitive in the interim. Get all that?

That is a herculean task, but it was the job that they were sold. Vikings ownership hasn’t suddenly blindsided everyone with this desire to stay competitive — though you would think that indeed by some of the fan reactions. The Vikings ownership remit was clear from Day 1. Be competitive.

I think this team is some way off from Super Bowl contendership. Trying to build for that goal with the expectation of staying competitive and probably having to find your next quarterback is extremely ambitious and going to be extremely difficult.

That likely goes a long way in explaining how the Vikings landed at two rookies in their leadership roles — two guys eager to prove themselves at the next level and hungry to get stuck into a massive task.

Time will tell if it is the right decision or not. That won’t come at the end of the first season. There should be a four-year plan to mirror the length of Adofo-Mensah and O’Connell’s contracts. Barring things going disastrously wrong, patience should be allowed for them to turn this thing around. Staying competitive will buy them time.

Again, the Vikings ownerships remit for the season was clear from Day 1. Keeping this team competitive will keep the jobs of Adofo-Mensah and O’Connell secure with an ownership group that has shown patience during their tenure.

It might not be the route that some were hoping for, but it is the way the Vikings have chosen to go. Now the question is, just how competitive can this team be in 2022?

The offense just needs to get better on the interior of the offensive line. Do that, and this offense is as high-powered as any in the league. The defense, on the other hand, still needs lots of work. The star players the Vikings have on defense staying healthy would be a great start. Injuries certainly haven’t helped. However, after the past two seasons, Vikings fans are right to be cautious with their expectations. After all, injuries are a part of football.

Much work needs to be done during the remainder of free agency and the draft to address a secondary that currently only has Harrison Smith as a certain bonafide starting level player. Get that area up to scratch, and the Minnesota Vikings have a chance to make some noise in a reasonably open NFC.

There is more than enough time to get this roster into competitive shape. It’s March. It is going to take some shred business in free agency and an excellent first draft for the new regime and the coaching staff getting the best out of their players.

That is the job at hand for Kwesi Adofo-Mensah and Kevin O’Connell.