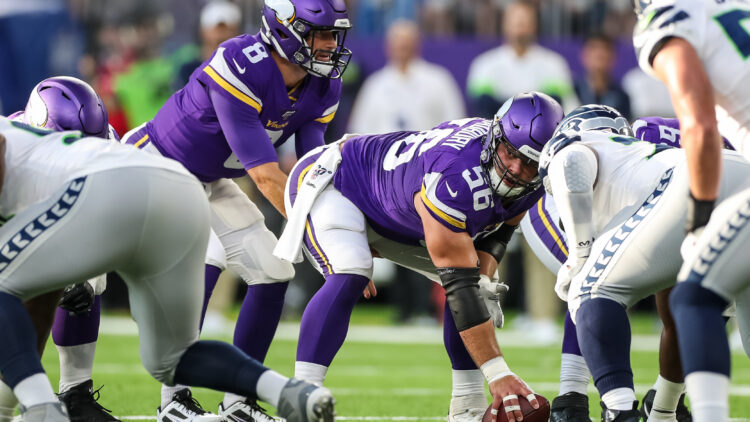 The Vikings OTA’s and mini-camp are officially over, and we are in the dead of summer. Not much happens between now and training camp. However, we can analyze what occurred in the Vikings mini-camp and how that may impact the team when training camp begins.

One thing that happened is the Vikings’ offensive line depth chart began to reveal itself. While it is too early to begin making predictions, the Vikings’ coaching staff is making those decisions. They will utilize mini-camp insights to form a preliminary depth chart for training camp.

The new Vikings staff prioritized the offensive line to the best of their ability this off-season. However, that was limited due to the state of the defense, which needed much more attention. Nonetheless, the Vikings signed and drafted multiple interior linemen and tackles.

Kevin O’Connell repeatedly stated that this year’s mini-camp was about installing the new scheme, and they were not making roster decisions. Although, when Schlottman missed time due to an illness, there was a shake-up in the offensive line.

This gives an inkling of how the offensive line depth chart will play out by the end of the preseason.

Taking what we have learned from mini-camp, we can form a prediction of the new offensive line. Here is my prediction:

Honestly, the only question we have is about the right guard. Who is going to win that position battle? Jesse Davis is the obvious front-runner as he took all the first-team snaps in mini-camp. However, Chris Reed or Ed Ingram could win that spot as well.

Where things get tricky is with the depth. The Vikings will likely only keep 9 or 10 offensive linemen. Currently, they have 15 linemen on the roster. Therefore, decisions will need to be made.

The Vikings’ remaining offensive linemen will be:

This lineup will not surprise many fans. However, there might be a couple of interesting decisions here. The first is that Oli Udoh doesn’t make the cut. Well, maybe this is not a surprise.

Udoh struggled mightily in 2021, specifically with holding penalties. Therefore, him not making the team shouldn’t shock you. This is especially true since the Vikings signed and drafted multiple guards.

The next surprise is Austin Schlottman not making the team. This one is a tricky cut as he was signed to be the backup center. However, during mini-camp, when he was out with an illness, Chris Reed took the second team backup center snaps.

Perhaps the Vikings elect to keep Reed as the backup instead of Schlottman. This wouldn’t be a crazy idea.

When thinking about backup linemen, you have to consider versatility. If Reed can play both center and guard, the coaching staff can have confidence that if someone is injured, they have a viable backup.