Vikings New-Look Offense Will Be in Attack Mode 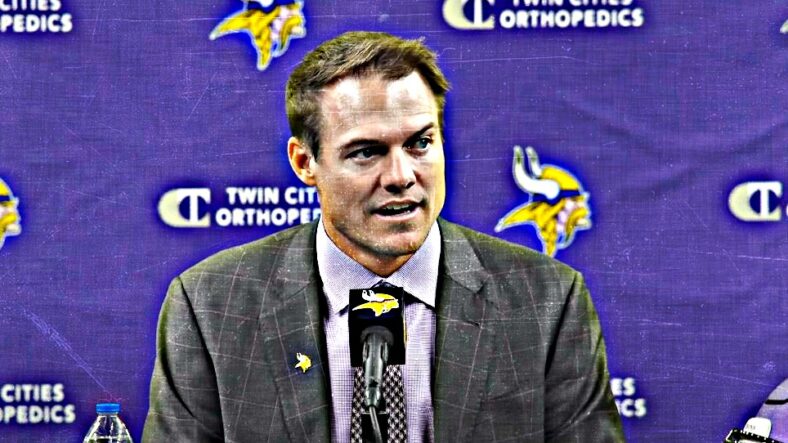 During a recent interview, O’Connell spoke about Kirk Cousins’ skillset — more specifically, how he will make progressions simpler for Cousins to follow. He will do this by removing the gray area, which will put the Vikings’ new-look offense will be in attack mode.

What does O’Connell mean by removing gray area?

The idea of removing gray area means to have set progressions in every play. The design of each play will tell Cousins exactly where to go with the ball. O’Connell doesn’t expect nor wants him to do anything more than that.

In fact, O’Connell’s sole goal with Cousins is to quiet his mind. If he can get Cousins not to think as much, play in rhythm, and play free, he believes Cousins could be great. This is not far stretched as Cousins has shown glimpses of being great.

Removing the gray area is to allow the offense to attack. Quieting Cousins’ mind will hopefully put him in a position to attack, not react to what the defense is doing. Keeping Cousins in rhythm and away from having to go off schedule is ideal for him and the offense.

How This Will Impact Kirk Cousins

For those who pay close attention to Cousins’ pre-game and post-game press conferences, one thing is clear. The guy is a computer. He will execute exactly what you tell him to execute. If you ask him to start going off and playing like Mahomes, bad things will happen.

Yes, every now and then, Cousins will have a mental lapse. This lapse often results in the most bone-headed plays. The first one that comes to mind is the interception against Atlanta in 2020.

However, for the most part, Cousins does an excellent job of doing what the play calls for. If he is supposed to attack one side of the field due to the look the defense is giving, that is exactly what he will do — even if this means looking away from what appears to be a much better option.

O’Connell mentioned this in his interview. He doesn’t want to be in the film room the next day, saying, “why didn’t you look this way?” He went one step further and said if he were the quarterback, he would respond, “you didn’t tell me to do that.”

Therefore, O’Connell is going to maximize this computer-like trait of Cousins’. He will remove the gray area of “hey, if it’s not there, look somewhere else. “ A statement like this is too vague for a computer like Cousins.

Instead, O’Connell will pre-build all of the progressions into a single play. For example, an NFL play will typically have a zone beater or man-beater built into it. All Kirk has to do is identify what coverage the defense is in and then follow the progression model from there.

Hopefully, the result of this is that Cousins has to think less. When he doesn’t have to think or play backyard ball, Cousins is an excellent quarterback. This will put the Vikings offense into attack mode.

The Vikings’ Offense Could Be Scary Good

On paper, the Vikings’ offense is loaded with talent. Dalvin Cook, when healthy, is a top-3 running back. Justin Jefferson and Adam Thielen make a great combination that can win their 1v1 matchups. Irv Smith Jr. is a mismatch waiting to be exploited. Even KJ Osborn took enormous strides forward in his second year.

The skill position players are good enough to beat any defense in the league. All the Vikings need is better play calling and design, as well as Cousins executing the plays. Well, the offensive line needs to be better, and the recent additions should help.

If O’Connell succeeds at getting Cousins to play free and not think so much, this team can go places. But this is a big if right now.