The Minnesota Vikings couldn’t get the ground game going, stopped scoring for a long time after the first drive — and still won in Week 9.

Kevin O’Connell got his seventh win as a first-year head coach, and the Vikings grabbed the NFC North by the throat. How? Well, the Green Bay Packers lost a fifth consecutive game, only their second five-game losing streak in the last 30 years.

So, as the Packers lost No. 5 in a row, Minnesota won No. 6 in a row, enough to spell a death sentence for Green Bay’s NFC North title aspirations. It’s past the point for Green Bay of “figuring it out and going on a run.’ That’s what they used to do. They may not be capable of that any longer.

In Washington, while the Packers were losing to the Detroit Lions, the Vikings surged in the 4th Quarter for a 20-17 triumph after trailing 17-7 in the 2nd Half. It was as if the Vikings said aloud to themselves, “It’s time to stop messing around.” Led by Kirk Cousins, a stout defense, and newly-acquired TE T.J. Hockenson, Minnesota scored 13 unanswered points and escaped the nation’s capital with the NFL’s second-best record.

Only the Philadelphia Eagles are better at 8-0 after nine weeks.

Minnesota now has a 99% probability of reaching the playoffs per FiveThirtyEight — and a 98% chance to win the NFC North. Vikings fans are always skeptical about proclaiming something before it occurs. But this one is over. Minnesota will win the NFC North and reach the postseason for the first time since 2019. It isn’t a “knock on wood” ordeal. It’s math.

Conversely, the Packers have 5% odds of reaching the postseason and a dumbfounding 0.6% chance to win the NFC North. The “demise” desired by Vikings fans for the Packers has finally arrived, at least for a single season. They won’t be resurrecting. And if they did, it would be to flirt with the NFC’s seventh playoff seed. That would take a prolonged winning streak real soon.

While the Vikings don’t have an easy slate of games through Thanksgiving — at Buffalo, vs. Dallas, vs. New England — Green Bay must play the Cowboys, Titans, and Eagles. They’re not going to suddenly win the next eight games with the Vikings finishing 3-7. That would need to happen for Minnesota to surrender the NFC North.

As it turns out, the Vikings stockpiling all those “ugly wins” in the last two months really mattered. 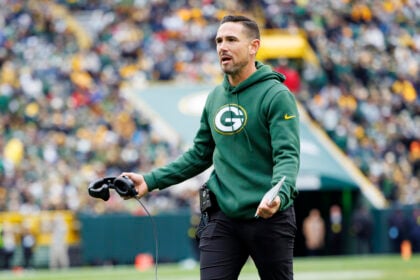