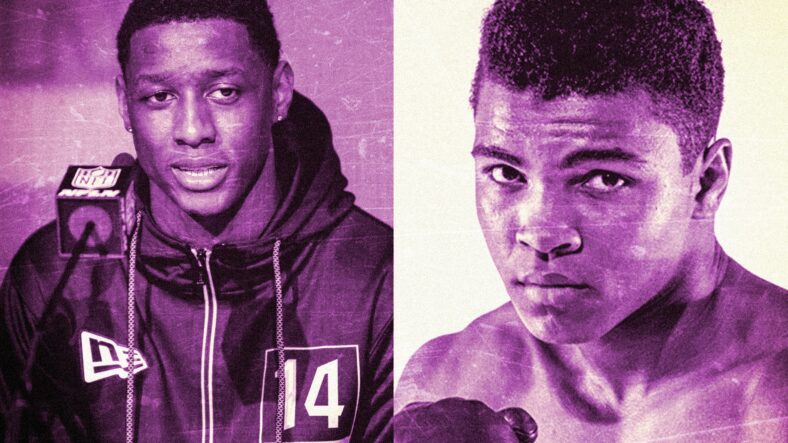 For weeks and even months, Ahmad “Sauce” Gardner was the most popular draft pick among Minnesota Vikings fans and NFL draft pundits to land with the franchise in April’s draft.

But then the Cincinnati Bearcat showcased brilliance at the NFL Combine, reducing the odds of his availability for the Vikings with the 12th overall pick. Some team, before the Vikings in the draft order, is now more likely to seize Gardner.

Of course, stranger things have occurred, and Gardner could still fall to the Vikings. For example, quarterbacks like Malik Willis, Matt Corral, and Kenny Pickett could theoretically flood the Top 11, sending non-quarterbacks to the back of the pack. Because NFL teams are so wolfish to find a franchise quarterback — like Josh Allen, Joe Burrow, Justin Herbert, or Patrick Mahomes as of late — “reaching” for passers is prevalent. It could happen in 2022, too.

Well, Gardner sweetened the deal with bravado on Monday, tweeting worldwide a Muhammad Ali-like declaration of his stardom. Sauce calls himself the best player in the draft. Period.

No interpretation is needed here. This is blunt-force machismo, only requiring on-the-field substantiation this autumn. Gardner calls himself the greatest among all NFL draft class participants — precisely the hubris general manager, coaches, and fans crave from a shutdown cornerback.

Back in December, ESPN draft expert Todd McShay linked Gardner to the Vikings in one of his early mock drafts:

“It’s hard to find another college corner who is trusted on an island in press-man coverage as much as “Sauce” Gardner. The 6-foot-2, 188-pounder’s 321 such snaps this season lead the nation by 61. And despite that big ask, Gardner has yet to allow more than 13 yards in a single game this year. (As an aside, I can’t wait to see his Cotton Bowl matchup with Jameson Williams, who averages 21.3 yards per catch.) Minnesota’s top three cornerbacks — Patrick Peterson, Bashaud Breeland and Mackensie Alexander — are all on expiring deals, and Gardner’s speed, ball skills and lockdown traits would help address a pass defense allowing 8.9 yards per attempt (27th in the NFL).”

The McShay connection was established well before the Combine, but nevertheless, Gardner has been a sought-after commodity by Vikings fans ever since.

Minnesota signed Patrick Peterson and Chandon Sullivan recently, lessening the roster need for a cornerback, to a degree, in the NFL Draft. However, in terms of long-term planning, the Vikings should strongly consider adding a Gardner or Derek Stingley Jr. in the draft.

Yet, that isn’t easy to pull off when one of the men is tweeting like Muhammad Ali.