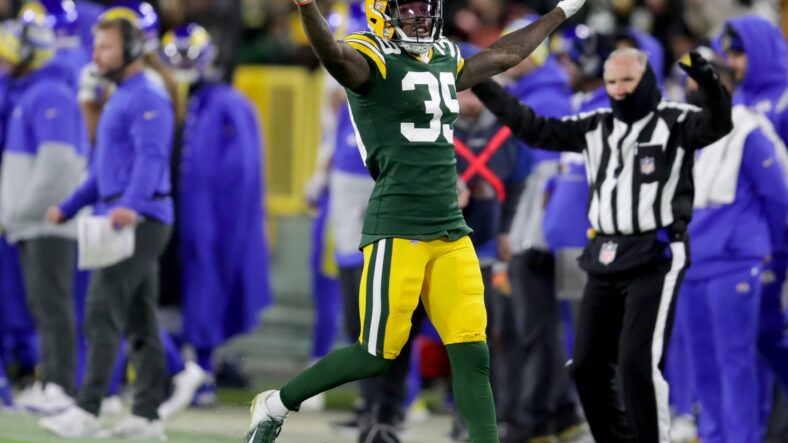 Green Bay Packers defensive back Chandon Sullivan (39) celebrates a broken up pass during the second half of the 36-28 win against the Los Angeles Rams at Lambeau Field in Green Bay on Sunday, Nov. 28, 2021. Photo by Mike De Sisti / Milwaukee Journal Sentinel via USA TODAY NETWORK Packers Rams Packers29 4906

Cornerbacks are the most talked-about position group on the Minnesota Vikings roster this offseason. Finally, the Vikings cornerback room starts to take shape.

There was some impatience as new players started to be brought in by Kwesi Adofo-Mensah and Kevin O’Connell without undoubtedly the weakest area on the roster being addressed. A boost in personnel was much needed. So, Friday’s announcement that Chandon Sullivan had signed for the team was welcome news.

Sullivan isn’t the marquee signing that his former Green Bay teammate Za’Darius Smith brings. However, the former Packer, who will be 26 by the time the season starts, brings both youth and experience.

During his four years in the league, he has played in 54 games with 21 starts, where he has made five interceptions and 16 pass deflections. His best two seasons came in Green Bay when current Vikings assistant head coach Mike Pettine was defensive coordinator.

He will play the nickel cornerback role that will be a key position in Ed Donatell’s defense.

We can now make a case for the Vikings having two startable cornerbacks on the roster. It will be a big offseason for Cameron Dantzler, who has shown potential but fell out of favor with Mike Zimmer last season — reportedly for not being good on special teams, which considering how badly Bashaud Breeland struggled all season, was a strange one.

Mercifully, a practice incident ended Breeland’s time in Minnesota. Dantzler ended the season having started seven of the 17 games. His Pro Football Focus grade of 73.8 was comfortably the highest by a Minnesota cornerback last season.

Dantzler should be in the mix for one of the two starting outside cornerback roles. Kris Boyd is, at best, a backup player if he sticks around at all. The same can be said for Harrison Hand unless he shows considerable improvement after a tranquil 2021 season.

That leaves the Vikings needing two more cornerbacks who can play on the outside, in my opinion. Ideally, a veteran you can 100% trust to start Week 1 and a rookie to compete with Dantzler or eventually take over from the vet. Drafting a second cornerback also wouldn’t be a bad idea.

If there’s no deal to be made, other options are out there, notably Kyle Fuller and Joe Haden. Also, other names like former Vikings Trae Waynes and Xavier Rhodes, plus AJ Bouye, Janoris Jenkins, and Steven Nelson are all currently without a team.

Then, there’s the draft, where there is an assumption the Vikings will take a cornerback in the first round. Personally, I’d hope the veteran signing is made before the draft, and the Vikings go into without a glaring need. Drafting to fill starting roles on the roster is where a team can end up reaching for players, and things go wrong. See Garrett Bradbury.

If Sauce Gardner slips down the board to 12 and he is the best player on the board — happy days. You take him. Suppose the top corners are off the board. You don’t want to be reaching for the next one out of desperation, missing out on an elite talent at another position for a guy you could have got, or at least a similar talent in the second round.

As well as Gardner, there is Derek Stingley, who may be on the board at 12 or could go earlier. Then there is Trent McDuffie and Andrew Booth. McDuffie has been climbing the draft boards while Booth has been falling. I’m not sure why.

For me, Booth is up there with Gardner and Stingley. With his stock falling, there might be an opportunity for a trade back with Kair Elam as the fallback option if someone comes in and takes Booth.

Trading back in the first round and drafting a corner? Now there’s a novel idea.

If the Vikings want to add even more strength to the secondary, they can look to add another defensive back on Day 2. Hopefully, as the Vikings cornerback room starts to take shape, by the middle of April, we will have a clearer picture of what the Vikings secondary is going to look like this season.