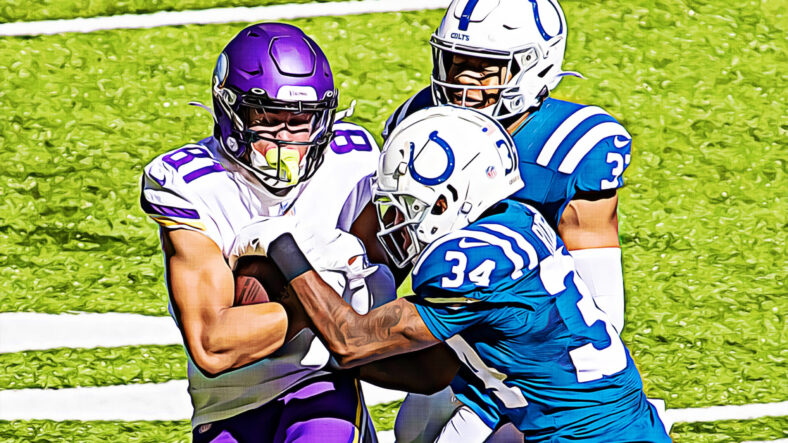 In 2021, University of Miami alumnus K.J. Osborn stepped up as the Minnesota Vikings WR3, a position on the team not maximized since the days of Jarius Wright.

And in the final games of the season, rookie Ihmir Smith-Marsette put some dazzling theatrics on gametape, giving Vikings enthusiasts a positive trajectory for his upcoming sophomore campaign.

That was fine and dandy — even overdue — but where would that leave wideout Bisi Johnson, who served as the team’s defacto WR3 in 2019? Johnson tore his ACL in the summer of 2021, right around the time some of the quarterbacks contracted the coronavirus, and Jake Browning had the scrimmage of a lifetime at TCO Performance Center.

Now, though, Johnson is back, evidenced by his arrival at Vikings minicamp on Tuesday. Drafted in the 7th Round of the 2019 NFL Draft, Johnson joined the Vikings with low expectations and the owner of notorious “Rick Spielman 7th-Round” draft stock. Spielman, who was fired by Minnesota in January, infamously stockpiled late-round picks like Skittles. Bisi was a Skittle.

Johnson showed mini-flashes of promise in 2019 and 2020, tabulating 483 receiving yards and three touchdowns on 64 targets. By the Vikings “old” WR3 standards, those numbers were rather commendable. But then Osborn came along in 2021 and whisked the Vikings to modern times, dropping 655 yards and seven scores on opponents. Osborn’s output was aligned with the typical way NFL teams do business “these days.”

Fast forward to May of 2022, and the Vikings have a new, offensive-minded head coach in Kevin O’Connell, Osborn firmly grasping the WR3 job, and Johnson, who will fight for a spot in the team’s WR room.

Here’s the cast of characters:

This earns Johnson a spot on the proverbial bubble, not unlike the NCAA’s March Madness selection process. Vikings fans have somewhat fond memories of the Colorado State alumnus because he was something when Minnesota had nothing at WR3.

However, to actually receive targets in O’Connell’s offense, Johnson must pass Smith-Marsette and arguably rookie Jalen Nailor — who WR coach Keenan McCardell evidently adores — on the depth chart. That’s a tall order for a man not overly familiar with a new coaching staff (and vice versa).

When the Los Angeles Rams, O’Connell’s former team, embarked on the 2021 season, they rostered six wide receivers. If O’Connell replicates the tendency — which is a relatively safe prediction — Johnson must stave off Nailor, hope Dan Chisena isn’t retained as a special teams gunner, assume no free-agent WRs are signed, or perform better than Smith-Marsette.

Those are the stakes as Johnson returns to a Vikings team different from the one he departed via injury last summer.