The Vikings Top Defensive Performers at Commanders, per PFF

The Minnesota Vikings defeated the Washington Commanders in Week 9, 20-17, in a game showcasing a 10-point 4th Quarter comeback by Kevin O’Connell’s team.

Washington’s defense did its best to fluster the Vikings for about three total quarters, but Minnesota turned on the offensive gas in the final period, thanks to Kirk Cousins, Justin Jefferson, Dalvin Cook, and newcomer T.J. Hockenson.

The two free-agent newcomers to the team, Jordan Hicks and Khyiris Tonga, were outstanding, helping to stifle a mediocre Commanders offensive attack. Hicks’ 92.5 grade was blistering, as the linebacker tallied 12 tackles and 2 passes defended. Tonga played 22 defensive snaps and had one tackle.

Another new Viking — but a rookie — Akayleb Evans stole the show after an injury to Cameron Dantzler. Evans notched 6 tackles, 2 tackles for loss, and crucial 4th-Down pass breakup. Dantzler is not expected to play in Week 10, so Evans could receive another chance to shine.

Harrison Smith recorded his third straight game with an interception, something a Vikings player hasn’t done since 2003 (Brian Russell and Corey Chavous both did so in that season). His pick from Taylor Heinicke flipped the momentum, and the Vikings roared back for a 4th Quarter comeback.

Danielle Hunter, who’s oddly been the topic of we-should-trade-this-guy whispers from some Vikings fans, performed marvelously with 7 tackles, 2 sacks, 2 tackles for loss, and 2 QB hits.

The Vikings hit the road again in Week 10, taking on the hot Super Bowl-frontrunning Buffalo Bills. Buffalo will be quarterbacked by either the mighty Josh Allen or Minnesota’s old pal, Case Keenum. Allen injured his elbow in Week 9, and his Week 10 status is undetermined. 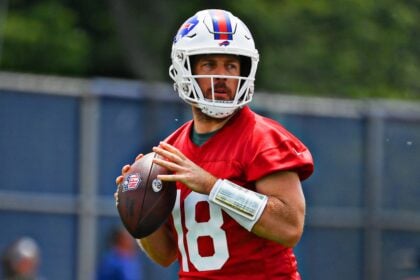