The Vikings Five Easiest Games in 2022 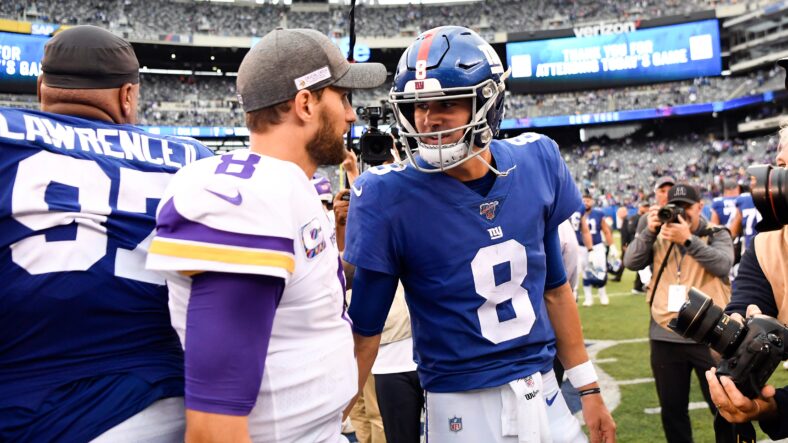 Now that we have the official schedule for the upcoming NFL season, Vikings fans have begun to pour over potential outcomes and look at what the final record may be.

A new General Manager has helped construct this roster, and Kevin O’Connell will look to lead a team trying to take a step forward.

When Mike Zimmer was let go, it was immediately assumed that this job would be among the most desirable in football. Skill position players were available in droves, and Kirk Cousins provided an established veteran at the quarterback position. Once the games get played, we’ll know how much that talent all mattered, but for now, we can dissect the results on paper.

Here are the five easiest games on the Vikings schedule, from least to most.

There’s no denying that the New York Giants have talent. Daniel Jones has flashed at times, and they hope to have a healthy Saquon Barkley back to bolster the running game. Kenny Golladay is a capable wide receiver, and maybe they begin to mix Kadarius Toney in a bit more this season. Kayvon Thibodeaux should be expected to make plays out of the gate, and he could cause problems for Cousins even behind a revamped offensive line. This won’t be a cakewalk, but getting the Giants at home should be enough for the Vikings to control the outcome.

There might not be a worse team in the NFL this season than the Chicago Bears. Despite having Justin Fields under center, they’ve done absolutely nothing to get him help. David Montgomery isn’t the back he once was, and Darnell Mooney should not be leading any wide receiver room. Maybe Cole Kmet is the offensive focal point, but that should tell you everything you need to know about the potential passing game optics. Roquan Smith is a stud on the defensive side of the ball, but Chicago could find themselves on the field so much that the unit will constantly be gassed. Soldier Field is a bugaboo for the Vikings, but it shouldn’t matter much this season.

The Lions aren’t the abomination they once were when going winless, but they certainly aren’t good either. Jarred Goff is still mediocre at best, and despite the emergence of Amon-Ra St. Brown last season, they’ll need first-round pick Jameson Williams to be an immediate star. De’Andre Swift has looked the part of a good back when healthy, but there are just not enough difference-makers here. Minnesota split with the Lions last year, and both games were entirely too close. I’d expect O’Connell to right that wrong in the season ahead.

Zach Wilson seems like a good kid and someone you can get behind, but he certainly took his lumps in year one. He’ll now have a rookie running back behind him in Breece Hall, and 10th overall pick Garrett Wilson will be looked at as a must-find in the passing game. Minnesota hasn’t played the Jets since they traveled to New York and won by 20 in 2018. This team should be better, but getting them at U.S. Bank Stadium should also wind up with a similar result.

As mentioned earlier, the Bears should absolutely be one of the worst teams this season. Minnesota may have wanted a bye week following a trip to London against the Saints in week 4, but this is the next best thing. O’Connell can’t let his team look past this game, but at home against a hapless opponent, this is an opportunity for the most lopsided win of the season.

What games do you have circled as wins for the Vikings? Check back tomorrow for the five toughest games of the upcoming season.