The Super Bowl Champs Are Interested in Vikings Defender 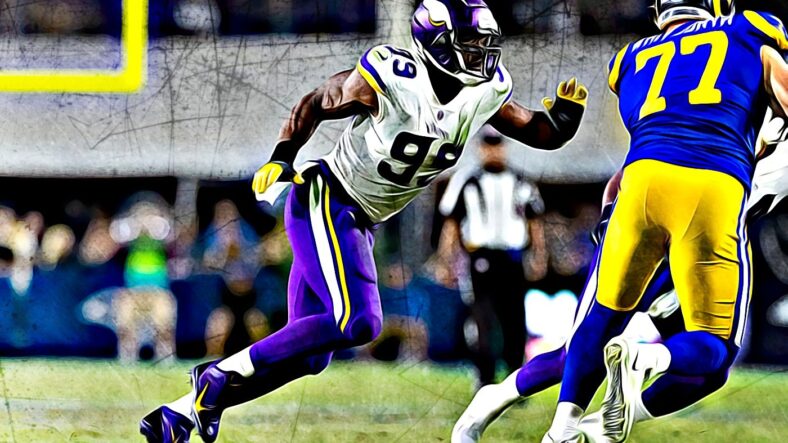 The Los Angeles Rams have a recent track record of trading draft capital for proven stars, and that tactic could affect the Minnesota Vikings.

Sean McVay’s Rams won the Super Bowl five weeks ago on the spine of a roster that doesn’t invest in high-round draft picks. In fact, Los Angeles hasn’t selected in the 1st Round of an NFL Draft since 2016 when the franchise put its eggs in the Jared Goff basket. That worked for about three seasons before Goff’s career trajectory waned.

Ever since, the Rams trade 1st-Round picks for stars — a strategy that obviously works, to a degree, as Matthew Stafford and friends won Super Bowl LVI over the Cincinnati Bengals.

In alignment with the trade-picks philosophy, the Rams inquired about — and might still have sights set on — Danielle Hunter, an EDGE rusher for the Vikings.

The Vikings allowed Hunter’s 2022 salary to guarantee last weekend, ensuring the player wasn’t released or something strange. Yet, there was ample suspense on a trade possibility involving Hunter, who could have commanded high-draft capital akin to the recent Khalil Mack trade.

Why would the Vikings trade Hunter, a fabulous pass-rushing defender? It’s quite simple. Hunter has missed fourth-fifths of all football games since the start of 2020 — but is the fourth-highest-paid EDGE rusher per cap hit in 2022 (as of March 20th). When healthy, Hunter is emphatically worth the high price. However, he has not played much in the last two years.

The report by Rodrigue is credible as trading picks for a sure-fire star like Hunter is the Ramsian thing to do. The franchise seemingly employs the tactic annually, last year acquiring Odell Beckham and Von Miller en route to its first Super Bowl triumph since 1999.

The likelihood of a Hunter trade is fairly low because the Vikings would be slim with pass rushers for a team hoping to contend in 2022. But as new general manager Kwesi Adofo-Mensah has preached value since entering the Vikings headquarters in January, he may not resist a gaudy deal for Hunter.

The only problem? The Rams don’t have much attractive draft capital, sending it elsewhere for the aforementioned stars. Any trade for Hunter would perhaps land the Vikings a 2023 2nd-Rounder or a 2024 1st Rounder. All of the goodies for Los Angeles in this April’s draft are allocated elsewhere.