The Road Map for the Vikings to Win the NFC North

There have been a lot of predictions flying around the Minnesota Vikings, and whether or not they can win the NFC North or even field a competitive team in 2022. For now, the NFC North crown belongs to the Green Bay Packers, and it will until some team puts in the work to take it away. Here’s how the Vikings can be that team in 2022.

The Minnesota Vikings had a couple trends when they were selecting players in the 2022 NFL Draft: versatility, physicality, character. Pretty much every player they drafted can be put at multiple positions on the field, and they bring a hard-nose style of football and big-time character with their play.

This is especially so of the players selected in the secondary where Minnesota will be relying on immediate production from Lewis Cine and Andrew Booth Jr. The Vikings were among the bottom-five in terms of passing yards allowed in 2021, and these rookies must step in to plug some of the holes.

The Green Bay Packers obviously lost WR Davante Adams this offseason when they traded him to the Las Vegas Raiders. While Adams gets to reunite with his old college QB Derek Carr, Matt LaFleur and Aaron Rodgers are stuck cleaning up the mess and trying to figure out where they will replace 1553 receiving yards and 11 touchdowns.

Last year, Green Bay got off to a horrendous start, getting shellacked by the New Orleans Saints 35-3 in the season opener. This year, Green Bay has to go to US Bank Stadium and play the Vikings in an NFC North rivalry game to start the year. In all likelihood, they’ll get up for this game a lot more than they did last year.

However, if they have the same sort of struggles, especially without Adams, the Vikings could jump out to an early advantage in the division. When you’re talking about a QB like Aaron Rodgers, every game matters. It sounds silly, but Week 1 is almost a must-win game for the Vikings if they want a shot at winning the NFC North.

Garrett Bradbury seemed to take his midseason benching in 2021 to heart. He played much better down the stretch of the year, especially in pass protection, and even dominated a Pittsburgh Steelers defensive front that led the league in sacks last season.

The Vikings did not pick up Bradbury’s fifth-year option this offseason, meaning that he is going to have to prove to the front office and coaching staff that he is worth keeping around. In response, he’s bulked up over the course of the offseason, and seems to recognize the challenge that has been presented to him.

In recent years, pass protection from the interior offensive line has been dreadful and has been a large reason why Minnesota has struggled to win games despite having dynamic players all over the field. An improved and motivated Bradbury makes this offensive unit that much more difficult to defend.

Especially on the defensive side of the ball, the Minnesota Vikings are relying heavily on veteran presence. Their two starting OLBs, Danielle Hunter and Za’Darius Smith, played a combined eight games during the 2021 regular season. Harrison Smith and Eric Kendricks missed some time as well.

Even on the offensive side of the ball, there’s been injury concerns. Dalvin Cook can be penciled in to miss two games this year. Irv Smith Jr. is the only proven pass-catching tight end and will play an important role in Minnesota’s new pass-first offense. Adam Thielen missed four games down the stretch of the year.

For the Vikings to win the NFC North, above all else, they need to remain relatively healthy. Their stars not only have to be on the field, but well enough off to make an impact with their play. Kendricks especially was clearly not himself for large portions of the 2021 campaign, and while Jordan Hicks can take some of the burden at middle linebacker, they will need the All-Pro version of Kendricks to show up this season. 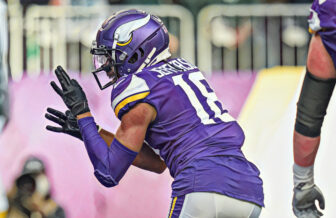