The Legend of Kwesi Grows 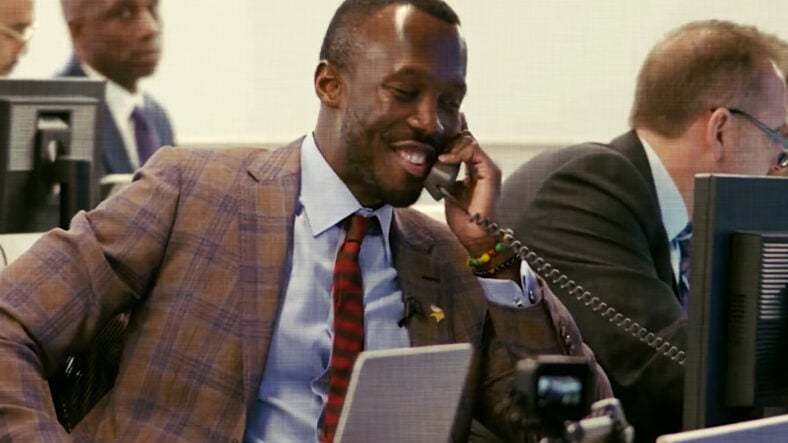 We are only three months into Kwesi’s time leading the Vikings. However, we have learned so much about how he operates through this short window. The NFL Draft gave us great insight into what to expect of Kwesi going forward.

And the Legend of Kwesi grew stronger after the Vikings released an official video on Youtube. This video provided us with great insight into the thought process the Vikings had throughout the Draft. We already knew some of the information from previous interactions, but seeing inside the war room on draft night is always great.

Some of what we already knew included Kwesi’s desire for collaboration. He seems to value this above all else. When you are looking for a leader, this is a desired trait.

Of course, it is fantastic to have a leader who can make tough decisions and be ruthless when necessary. However, it is next level when that leader can sit back and realize that he might not have the best idea. No individual will have all the right answers, so allowing everyone to provide input is infinitely valuable.

One thing Kwesi mentioned in the video is that it is great to be hyped up for gameday. Although, when you step into the war room of the draft, you need to be emotionless. You must think rationally if you are going to make the best decisions for the team.

This should not surprise anyone. Kwesi is, after all, a Wall Street guy where everything comes down to valuations, and emotions only lead to mistakes. This is a bit of a change-up from Rick Spielman, who sometimes deviated from others in the room and went with whoever he wanted.

What We Learned About Kwesi

One of the most interesting tidbits we can learn is that Kwesi never wants to be trapped in a corner. He wants to have a plan for when his plan doesn’t work. This is especially important when it comes to draft time.

There will never be a time in the draft when everything goes exactly how you think. You will need to adapt on the fly. Hopefully, you are adapting and making the right decision. This is where having backup plans comes into play.

We saw this play out when he traded with Detroit. Although most of us were upset about the trade, Kwesi was not. There is a good reason for this too. He values trades based on the new aged charts like PFF’s chart rather than the traditional charts.

When using the new aged charts, Kwesi won the Lions trade. Best yet, as seen in the video, Cine was their target all along. In fact, the Vikings wanted to specifically target picks 34 through 77 as this is where they thought the best value of the draft was at.

These types of moves are likely what we can expect from Kwesi in all decisions from now on. He will evaluate the value (talent vs. cost) and attack it aggressively.

Where the Vikings’ Leadership Takes Us Next

We have been on a wild ride over the last few years. The Vikings always seem to be a team that has fans on a rollercoaster of emotions. In 2017 we peaked on the Minneapolis Miracle, only to be crushed the very next week. Last year we experienced this same ride, but it seemed to happen every single week.

Although, now we have new leadership in the building. Hopefully, they will take us to a championship. But our leadership is fresh meat in a pool of piranhas.

For better or worse, we fans are at the mercy of Kwesi and Kevin. But with the way they executed the draft, we are in good hands. We might disagree with their decisions, but at least they have a well-thought-out plan and are aggressive in their execution.