The Homegrown Nature of the Vikings 2022 Offense 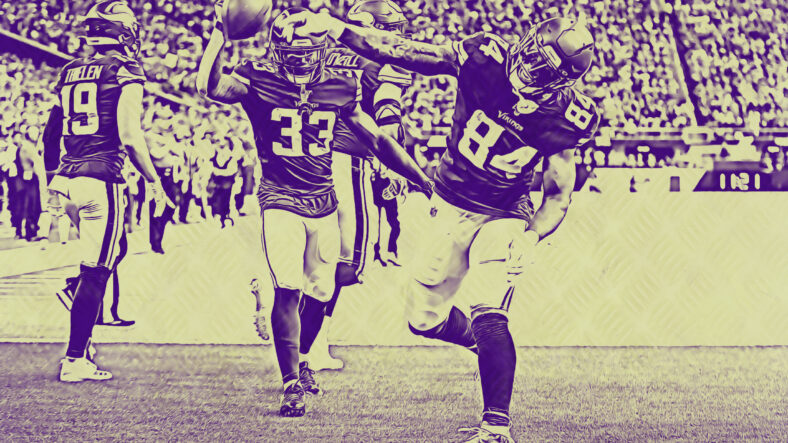 The Minnesota Vikings added key defensive personnel via free agency to start games in the last couple of years, but the offensive side of the enterprise is largely homegrown.

Indeed, around half of the defensive starters were not drafted by Minnesota — Jordan Hicks, Patrick Peterson, Harrison Phillips, Za’Darius Smith, Chandon Sullivan, and Dalvin Tomlinson.

Glance at the depth chart on offense, though, and the arrangement is markedly different. In fact, per spring depth chart projections, Kirk Cousins is the only outsider from the group drafted elsewhere.

While the defense possessing free-agent names drafted by other teams is not a bad thing — just as other NFL teams showcase non-organic starters on offense — this Vikings tendency is somewhat unique.

The Buffalo Bills are slated to start five non-organically-drafted players on offense in 2022. The Arizona Cardinals will be around eight. It’s four for the Cleveland Browns. And the Chicago Bears will start about four such men, too.

Minnesota isn’t the only team with a homegrown offense, but the lineage of this tendency can be sourced to scouting and subsequent draft habits. Somehow during a defensive era of football led by Mike Zimmer for eight years, former general manager Rick Spielman managed to concoct a starting offensive lineup via the draft — now given a rubberstamp by two newcomers in Kwesi Adofo-Mensah and Kevin O’Connell.

On the other hand, a case can be made the Vikings should look outside of its draft walls to fix team weaknesses. For example, Minnesota ranks as follows via pass protection in the last eight seasons, per Pro Football Focus:

Most sensible Vikings enthusiasts would trade multiple homegrown players to drag those OL woes from Hades to respectability. In other words, perhaps the offensive line needed some outside talent instead of the organically-drafted players over and over. The Vikings draft acumen in selecting skilled pass protectors floundered in the last decade, and the proof is in the numbers.

The takeaway? If the Vikings draft an offensive player — past or present — there’s a reasonable chance he will start, evidenced by the current depth chart, especially in contrast to the starting defensive personnel.

Moreover, the trait will be one to watch as more drafts are conducted by Adofo-Mensah with Spielman in the rearview.