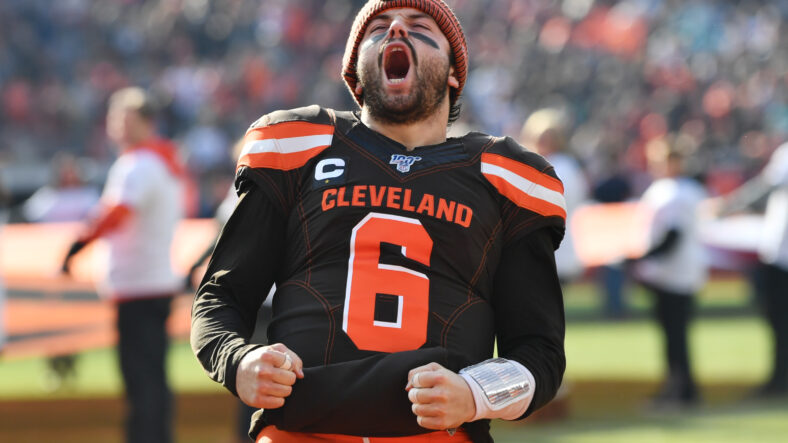 The Carolina Panthers traded for quarterback Baker Mayfield on Wednesday, sending a conditional 5th-Round draft pick to Cleveland for the refugee passer.

Mayfield was replaced in Cleveland by the embattled Deshaun Watson, who was traded to the Browns by the Houston Texans in April. Watson faces a suspension in 2022 for multiple allegations of sexual misconduct.

So, Cleveland had to do something with Mayfield as the Oklahoma alumnus soured on Cleveland for obvious reasons. In theory, because he was under contract on his rookie deal, Mayfield could have quarterbacked the Browns during Watson’s impending suspension, but he wanted nothing to do with the circus.

Ultimately, the Panthers obtained Mayfield for 5th-Rounder while Cleveland pays 68% of Mayfield’s remaining salary. Not a bad deal for Carolina, a team desperately trying to solve its QB1 problem since the first departure of Cam Newton.

In a roundabout way, the trade package for Mayfield makes the Vikings look foolish — not because Minnesota should’ve finagled a deal for him but because of past Vikings trades compared to the Browns-Panthers transaction.

In 2019, former general manager Rick Spielman sent a 5th-Round pick to the Baltimore Ravens for kicker-punter Kaare Vedvick, hoping to fix the Vikings kicking troubles once and for all. Vedvick was awful and was released less than three weeks after the trade.

Apparently, unless the NFL trade market has wildly swung in three seasons, a no-name kicker is the equivalent to a QB1 who ranks 12th in touchdown passes since the start of 2018. Well, the trade market has not changed that dramatically — it was just a silly deal by the Vikings in 2019 and a small price this summer for Mayfield.

Moreover, Spielman also fired up another head-scratcher last year when TE1 Irv Smith Jr. was lost for the season due to a torn meniscus. Described as a “panic trade” by many, Spielman sent a 4th-Round pick to the New York Jets for tight end Chris Herndon and 6th-Rounder last summer. Herndon was either supposed to start for the Vikings or provide credible depth in the tight end room.

Of course, this does not mean all Spielman’s dealings were foolish. He orchestrated a magnificent trade in 2020 to placate Stefon Diggs, who was disgruntled about the Vikings style of offense. In return, the Vikings received Camryn Bynum (FS), Justin Jefferson (WR), Zach Davidson (TE), Janarius Robinson (EDGE), and Kenny Willekes (EDGE). Across the board for Vikings fans, the trade was a slam dunk. The Bills are even happy with Diggs in Buffalo — a rare win-win barter for both parties.

On the silly trades by the Vikings, at least compared to the recent Mayfield deal, the Vedvick transaction is in the books. The Ravens drafted Broderick Washington with the trade capital, a defensive lineman who’s played 22 games in Baltimore. Minnesota “lost” that trade — emphatically.

To salvage the Herndon deal, Vikings rookie tackle Vederian Lowe must blossom into something more than a footnote. He was the final piece to the trade puzzle involving Herndon.

The moral of the story? Quarterbacks evidently become cheap during the summer when conventional bidding wars end. Or — the Vikings former boss just made some weird deals.