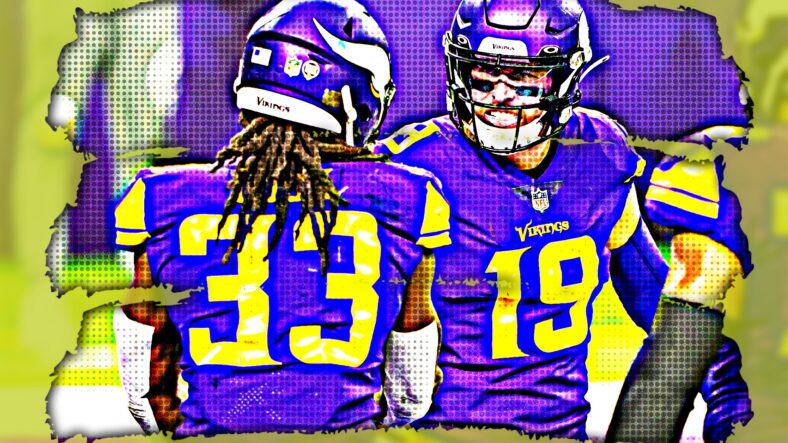 The Minnesota Vikings have less than one week to get under the cap — they’re currently over by about $15 million — and that means restructures and releases are on the docket. At this time of year, seemingly annually, the Vikings are close to the edge for cap space. And this year, the franchise is over the top.

But according to CBS Sports, Cousins may not be the player on the trade block. Per Jason La Canfora, the Vikings are exploring trading other big-name players like Adam Thielen, Dalvin Cook, Eric Kendricks, and Michael Pierce.

Once you’ve picked your phone up off the floor, you might begin to understand the rationale. All of those players, minus Pierce, are somewhat “old” at their respective position. Cook isn’t old by ordinary standards, but 27 (Cook’s age when the 2022 season starts) is “up there.” Thielen will be 32 this summer, too. Kendricks just turned 30.

“…league sources said the new regime in Minnesota is open to dealing several of their more high-priced veterans to try to reset the cap situation, add more draft picks and prepare for the future. And the sense among some of the execs I spoke to is that the Vikings seem to understand that they aren’t in position by and large to hit home runs with these trades (which are more like salary cap dumps). Receiver Adam Thielen, linebacker Eric Kendricks, defensive tackle Michael Pierce, even running back Dalvin Cook are names making the rounds. I’d be surprised if a few were not moved.”

When the Mike Zimmer era floundered down the stretch of his tenure, Vikings fans clamored for change. So, the ownership sought fresh new eyes and brains, landing men like Kwesi Adofo-Mensah and Kevin O’Connell.

Earlier in the week, our sister-site, PurplePTSD, explained the inevitability of excruciating decisions by the franchise to get under the cap before March 16. La Canfora’s jottings align with that prediction. The money has to come from somewhere. And if the Vikings are not trading Cousins, other veterans will hit the chopping block.

The likelihood of all those men getting traded is low, but it’s a safe assumption that some longtime veterans will be dealt this offseason.

This is the shots-fired moment on the reality of that.

You wanted change. You’re gonna get it.