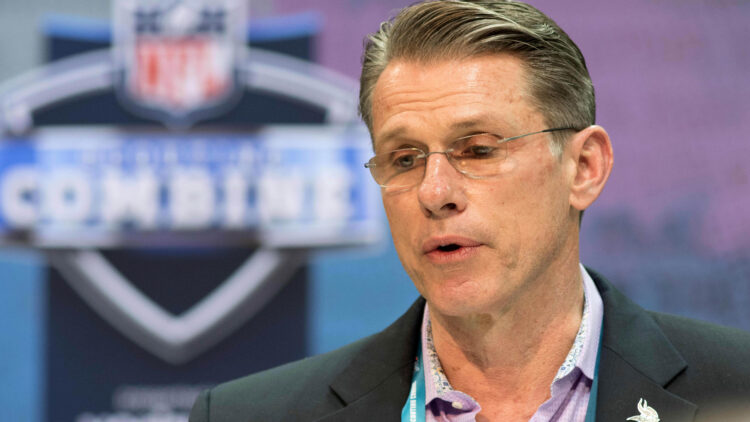 We are 10 days from the National Football League draft and Kwesi Adofo-Mensah will bring his analytically focused background to the war room as the man in charge for the first time. He takes over a Vikings franchise looking for a new direction. Before that pick is in, how did the man before him do?

Rick Spielman became the Vikings General Manager before the 2012 season. He had two first-round picks that year and was looking to right the ship for a team that had failed to the tune of a 3-13 record the year before. He’s been noted as a guy who loved to pile up picks and had success in the middle rounds of drafts. We don’t yet know what Adofo-Mensah’s style is, but we saw plenty of Spielman’s. To get you ready for the excitement that is the draft, here’s the best (and worst) of what was in the first round over the past decade.

Taking a center in the first round is a tough proposition, but the Vikings needed significant help on the offensive line. He started immediately and has now started 45 games over three seasons in his career. Unfortunately, the greatest highlight might have been a deflected pass resulting in a reception against the Green Bay Packers. He occupies space but has become a turnstile for Minnesota.

Needing a receiver, Minnesota opted for the Ole Miss product. He drew just one start and three targets in his rookie campaign, and things barely got better from there. His time with the Vikings ultimately ended after two touchdowns across four seasons, and he’s become an afterthought on offenses since.

The first pick under Spielman as the GM, Kalil turned a Pro-Bowl rookie season into a quickly eroding career. He was with Minnesota until 2016, went to the Panthers at age-28, and was out of the league by 28.

Potentially a talented player that we never got to see the bulk of, Floyd drew just one start in his rookie year before generating 4.5 sacks as an interior lineman the next season. He dealt with an injury that would ultimately end his career, and Vikings fans saw him play in just 44 games prior to him being forced to hang it up.

Taken at the end of the 1st round in 2020, Gladney’s career has never really gotten going. He played a solid cornerback for Minnesota, starting 15 of 16 games in his rookie season, but then missed last season due to an assault charge. He was released by the organization and then found not guilty in 2022. The Arizona Cardinals have brought him in on a two-year deal.

Another late pick in the 1st round, Hughes managed to start just seven of the 24 games he played for Minnesota. Availability was not something synonymous with his style, and he moved on to Kansas City last season.

Selected with the final pick of the first round in 2014, Minnesota thought they had their quarterback of the future. After sitting the first few games, Bridgewater started 12 contests in his rookie year. He was then handed the reigns in 2015 before a gruesome knee injury altered his trajectory and knocked him out for all of 2016. A journeyman quarterback at this point, Bridgewater operates as little more than a placeholder for teams.

Waynes didn’t become a consistent starter on Mike Zimmer’s defense until his third NFL season, but he did use length to transform himself into a solid option for a few-year stretch. After going to the Bengals, he was bit by the injury bug, and productivity fell off a cliff.

Needing a bookend for a bad offensive line, Darrisaw was seen as the answer. He got an opportunity partway through his rookie year after dealing with an injury and didn’t look back. Starting 10 games, Darrisaw has looked the part of a franchise cornerstone when it comes to the line.

Used incorrectly for most of his time with the Vikings, Patterson has gone on to rack up four Pro Bowl appearances and capture a Super Bowl ring. Although he’s not a good route-runner and has questionable hands, he’s supremely athletic and insanely quick. He worked his way in as a kick-returner but has ushered the acceptance of offensive weapon as a position.

Seen as an athletically gifted specimen out of UCLA, Barr started 12 games his rookie season. Four Pro-Bowls later, he made such an impact on Zimmer that the linebacker was swayed in his decision to sign with the New York Jets when reaching free agency. He missed games with injury plenty often, but his impact was also felt each time he was on the field.

Rhodes didn’t establish himself as a consistent starter until year two but quickly earned the “Rhodes Closed” moniker not long after. He’s a big corner and used his size and athleticism to vault himself into that shutdown territory. He’s got Pro Bowl and All-Pro noodles to his credit and continues to draw starts into his 30s for the Indianapolis Colts.

Eyeing the top spot on this list, the only thing holding Jefferson back is time. He’s immediately become among the top five wide receivers in the league and appears to be the best talent Minnesota has had at the position since Randy Moss. Speed, route-running, ball skills, and hands are all in the Griddy-man’s bag of tricks.

Nearing the end of a potential Hall of Fame-worthy career, it’s worth wondering how much Smith has left. That said, he’s a six-time Pro Bowler and has been named to an All-Pro team. Immediately since being drafted, the Golden Domer has stabilized the Vikings free safety position, and it will be a weird sight to see him usher in a new face.

This ranking was done by evaluating where the player is now and is obviously one person’s opinion. Share yours. What would you change?