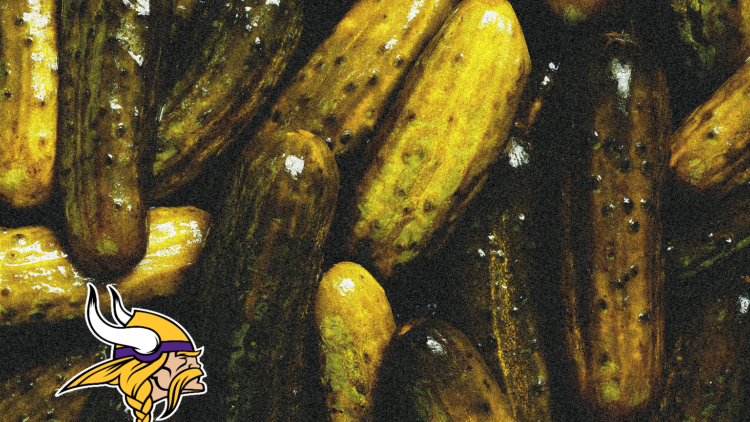 Remember Sunday evening when Kellen Mond entered the game in Green Bay, relieving Sean Mannion in what folks believed was a “finally” moment?

That was all for a pickle juice break.

Veteran QB2 Sean Mannion started the Week 17 contest for the Vikings after QB1 Kirk Cousins missed the game due to COVID. Mannion was generally ineffective, refusing to push the ball downfield and missing a handful of open pass-catchers. His QBR was a lowly 34.4 on the evening.

Because Mannion did not shine, Vikings fans fervently wanted a look at Mond, a rookie from Texas A&M. But the current Vikings regime seems a bit low on his future status as a QB1. Nevertheless, Mond suddenly showed up in the huddle late in the game, apparently taking over for the struggling Mannion.

Well, Mannion was drinking pickle juice, hoping to alleviate cramping in his hand. This explained why Mannion rejoined the offense on the following drive [after Mond threw a sure-fire pick-six to the Packers that was dropped].

Evidently, pickle juice cures cramps. If you had a miserable time watching the Packers flog the Vikings, at least you can go forward in life knowing pickle juice is the elixir for muscle cramps. Mannion drank some, and the gigantesque quarterback was back in a matter of minutes.

According to Active.com, this is the science behind pickle juice and cramps:

“Research, as far back as several decades ago and as recently as 2013, suggests pickle juice relieves cramps. In the 2013 study, cramps lasted about 49 seconds less when participants drank pickle juice rather than water. The first assumption is that fluids and sodium are anti-cramping agents.  However, other studies have concluded that the plasma volume and plasma concentrations of sodium remain unchanged after pickle juice consumption, leading researchers to believe something else is causing the cessation of the cramps. Most experts think it’s the vinegar. It’s believed that the vinegar triggers a reflex that alerts our brains to tell our muscles to stop contracting and relax, and the muscle cramping is reduced as soon as the vinegar touches receptors in the mouth.”

But at least the pickle-juice-Mannion lore can live forever. That – and offensive lineman Garrett Bradbury’s circus catch.

The Vikings host the Chicago Bears at U.S. Bank Stadium in Week 18 for a meaningless game.