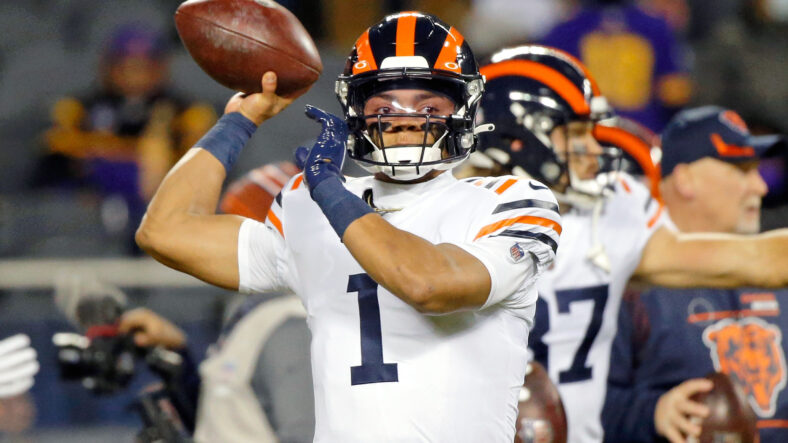 Quarterback is the most important position in 2022 NFL football. Without at least an above-average quarterback, teams aren’t taken seriously as a legitimate playoff contenders.

The NFC North has a variety pack of QB profiles: superstar celebrity, young and reckless, and a couple of “system quarterbacks” (cue the Kirk wars) that have worked with Kevin O’Connell and Sean McVay. Let’s dive into how these signal-callers stack up against each other, what each one brings to the table, and one bold prediction for each player’s season.

2021 was, well, a growing experience. The Bears were a mess, Matt Nagy couldn’t decide whether to start Fields or Andy Dalton on a week-to-week basis, and Fields was erratic in his decision-making. Both the state of the franchise and his coach’s indecision assuredly impacted the rookie’s play on the field. He threw more interceptions than touchdowns, had a sub-60 completion percentage (flat-out bad for today’s standards), and ranked 30th of 33 qualified QBs in passer rating [1] [2].

Last season held moments where he flashed his potential and many where he showed his inexperience. There was the forgettable 9-sack, 6 for 20 embarrassment against the dysfunctional Browns in his first career start. An imperfect Week 9 showed us how bright his future could be. In his first Monday Night Football game at Pittsburgh, he led a 14-point fourth-quarter comeback to take the lead with under 2 minutes to play. The defense let him down on the ensuing drive (sound familiar, Vikings fans?), but Bears fans had to be encouraged with what they saw from their young QB that night. His other Monday Night game in Week 15 vs. Minnesota was almost the opposite. He played well (a 96.6 passer rating and 320 total yards), putting his team in position to score time and again. But he failed to finish, as he lost one fumble and turned the ball over on downs three times in the second half. [3]

Unfortunately for young Justin, it will get harder before it gets easier. The Vikings’ defense is retooled and reschemed, Aaron Rodgers still owns the Bears, and the Lions are on the up and up. Possibly most detrimental to Fields’ development will be that he has to deal with his second coach, offensive coordinator, and GM in as many years in the league. Learning NFL-level schemes, lingo, and speed are hard enough. Being asked to go back to the drawing board in year two is sort of unfair. Oh, and by the way, he lost Allen Robinson.

It’s not all going to be a struggle for Fields. There’s hope in Chicago that Ryan Poles and Matt Eberflus will be a step up from the oft-loathed Nagy/Pace combo (they did make the playoffs twice with Mitch Trubisky; they couldn’t have been that bad). Even though he will have to learn a new system again, having that first year under his belt will go a long way in building up his confidence and composure. He does have some new toys to play with to try and replace Robinson, and Darnell Mooney has proven to be an electric play-maker. He has that twitchiness that makes him a threat on every play. Most importantly, with the departure of Dalton and Nick Foles, the Bears have made it clear they’re riding with Fields this year, which should give him confidence knowing that the job is his to lose.

It will be a better year for #1 in orange and navy, but he’s still got a ways to go to be a formidable QB in the NFC North, let alone the NFL.

Prediction: The Bears season starts brutally: home to the Niners and Sunday night at Green Bay. Fields will play so poorly in these two games that Bears fans will call for Trevor Semien in Week 3.

Stay tuned for the reviews on Cousins, Goff, and Rodgers (not necessarily in that particular order).