You’ll Never Believe Who the Vikings Signed at QB

To start your Tuesday, you’ll never believe who the Vikings signed at QB.

It’s the young journeyman Josh Rosen, from 2018 NFL Draft fame. The man now plays for the Vikings, presumably as the team’s QB3. Rosen has bounced around the NFL since 2018 and will now try Minnesota on for size.

You’ll Never Believe Who the Vikings Signed at QB

Last week, the Arizona Cardinals snatched then-QB3 David Blough from the Vikings practice squad, creating a need for Minnesota — a team that clinched the NFC North last Saturday and is verifiably on the way to the playoffs for the first time since 2019. Like Blough, Rosen will live on the Vikings practice squad and would be the next man up if something happened to Kirk Cousins and Nick Mullens.

Rosen, only 25 years old, has played seven NFL teams since 2018, including the Vikings as of Tuesday:

The Cardinals scooped Rosen out of the 2018 NFL Draft with the 10th overall pick in a class, at the time, that was considered deeper than the ocean for quarterback talent. Baker Mayfield, Sam Darnold, Josh Allen, Lamar Jackson, and Rosen were plucked from Round 1. Allen and Jackson turned into superstars, while Mayfield, Darnold, and Rosen became drifters.

Rosen has played in 24 NFL games, starting 16, en route to 2,864 passing yards, 12 touchdowns, 21 interceptions, and a stinky 61.1 passer rating. His teams have a win-loss record of 3-13 in his 16 starts, which is, of course, not good. But the Vikings won’t call on Rosen to start — or even play, really — only existing in an emergency capacity, much like Blough from September to December.

Minnesota also worked out a CFL stud this week — Nathan Rourke from the BC Lions. Rourke has auditioned for a handful of teams since the CFL season capped, but the Vikings evidently preferred Rosen, who has more NFL game-readiness than the 24-year-old Rourke.

Too, the Vikings have a QB3 need in the first place because the 2021 iterations left the team at the end of the summer. The Vikings employed Kellen Mond and Sean Mannion in 2021 and this summer, but neither man was productive enough to make the cut for the 53-man roster in 2022. Mond landed with the Cleveland Browns, while Mannion trekked to the Seattle Seahawks.

The long-term trajectory for Rosen is interesting because some pundits and draft brains still believe the UCLA alumnus received a raw deal in Arizona. The Cardinals committed to Rosen for one single year before upheaving the organization in favor of a Kliff Kingsbury + Kyler Murray sandwich — that has not panned out despite fat stacks of cash thrown in their direction. Moreover, Rosen’s supporting cast as a rookie with the Cardinals in 2018 was abysmal. In theory, he could rejuvenate with the Vikings, but conventional logic suggests that may have already happened elsewhere by now.

Rosen’s third career start pitted him against the Vikings, and the Cardinals lost 27-17 at U.S. Bank Stadium in 2018. 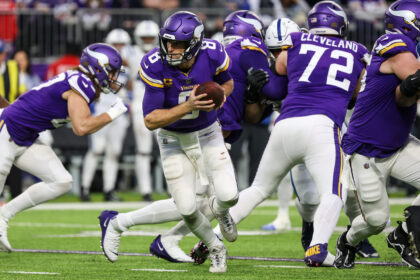 Also Read:
ESPN Was Not Impressed — At All — With Kirk Cousins vs. Colts