Looking Back at the Vikings Memorable 2009 Season 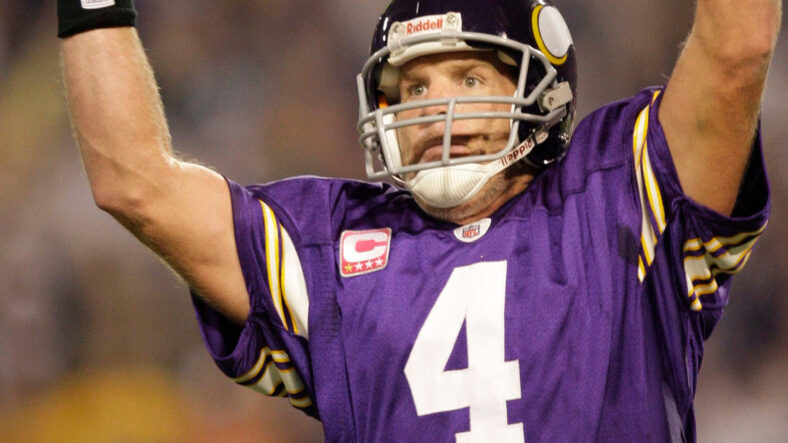 One of the most memorable seasons in Minnesota Vikings history occurred in 2009.

Why was that such a memorable season? One of the greatest quarterbacks in NFL history signed with the franchise.

It was 13 years ago today Brett Favre signed with the purple and gold. From 1992-2007 he was the team’s biggest rival, playing for the Green Bay Packers. Some Vikings fans did not like the idea of the former enemy joining their side and having to root for him. Most Vikings fans welcomed the gunslinger with open arms and did not care who he played for. After all, he gave them the best chance to win.

The previous year Minnesota went 10-6 and won the NFC North. They had a good team overall but just were missing excellent quarterback play. Even at his worst, Favre would have been an upgrade over Tarvaris Jackson and Sage Rosenfels, no doubt.

That day was huge for the media, both locally and nationally. That was my first day as a promotions intern for KFAN Radio (home of the Vikings). I went upstairs to the office and saw the breaking news on the TV right by the door on ESPN. The excitement around the office was very high. Favre was shown on TV with head coach Brad Childress in a car. Once they arrived at the team’s facility in Eden Prairie, many Vikings fans welcomed their former archrival.

Working the station events, I saw how much excitement that whole season brought. Fans were absolutely pumped. The team started 6-0, eventually won the division at 12-4, and swept the Packers for the first time since 2005. They clinched the second seed in the NFC behind the New Orleans Saints.

After securing a first-round bye, Minnesota rolled over the Dallas Cowboys 34-3 at the Metrodome to advance to the NFC Championship.

Given that the game was on the road against a very good Saints team led by quarterback Drew Brees, it was not expected to be easy, but the Vikings still had a shot at winning. After taking a 7-0 and 14-7 lead, Minnesota never led again and eventually lost 31-28 in overtime.

Despite being minus-four in the turnover battle, they still nearly won and should have won. Had they won and advanced to the Super Bowl in Miami against the Indianapolis Colts, they would have had a good shot against them too. No guarantees they would have defeated Peyton Manning’s squad (Manning was 4-0 all-time against Minnesota, by the way), but they still would have had a very good shot. They lost 31-17 to the same team Minnesota should have beaten and nearly lost to them at the Metrodome last season. That 2008 team did not have Favre, Percy Harvin, or Phil Loadholt. Sidney Rice was a non-factor that season and had 83 receptions and eight touchdowns in 2009.

Given how beat up Favre was after that Saints game, he would not have been 100% and may not have been as good as usual (he did not play his best against the Saints either), but he likely would have done enough to help Minnesota win their first Super Bowl ever.

That team was loaded.

It possessed a good offensive line, which included eventual Hall of Famer Steve Hutchinson. They also had a great running back duo in Adrian Peterson and Chester Taylor, wide receivers Rice, Harvin, and Bernard Berrian, and tight end Visanthe Shiancoe. The defense was also very good with Jared Allen, Kevin Williams, Pat Williams, Ray Edwards, Ben Leber, Chad Greenway, E.J. Henderson (missed the playoffs with a broken leg), Cedric Griffin, and Antoine Winfield. The safeties were a liability all season, but the defense as a whole was very good (ranked sixth overall in the league, and their 19.5 points per game were fifth best).

As fun as that season was, the ending will forever be one of the toughest losses in team history. Despite all the turnovers and 12-men penalty right before Favre’s across-the-body interception, the Vikings still nearly won and should have. They outgained the Saints by 218 yards and had 16 more first downs. Yes, the Saints deserve credit for the forced turnovers, but the Vikings lost that game more than the Saints won. The first turnover came on a botched handoff between Favre and Peterson in the red zone right before halftime. The fumble was charged to Favre, but it was on Peterson. As good as Peterson was that season with a league-high 18 rushing touchdowns, he also had a fumbling problem. This one, though, did not occur with a defender knocking the ball out. It was on a handoff.

Peterson had two fumbles later that were recovered (one by himself). He did, however, also rush for 122 yards and three touchdowns. Harvin and Berrian each lost a fumble. Favre had an earlier interception, but the league admitted later it should not have counted as he took a late hit to the knee. Earlier on that drive, the Saints were called for roughing when they should not have, so it was not a surprise they did not call that. The officiating that game was awful, especially in overtime, and the Saints placed a bounty on Favre. While both were very disappointing, the Vikings still should have won. Many chances to win that game, and they flat-out blew them.

The defense did enough to win but also did not force any turnovers. The only Saints turnover came on a muffed punt return by Reggie Bush. Vikings recovered, but then Peterson fumbled the handoff.

Favre and Peterson deserve blame for their mishaps that game, but in the end, the team made many mistakes overall. Without either of them, Minnesota also does not play in that game. Peterson, while having fumbling issues that game and all season, still had an excellent year overall, and scoring three touchdowns, especially in a playoff game, is never easy, along with rushing for over 100 yards.

Before the second interception, Nafahu Tahi entered the huddle as the 12th man, which moved them back five yards to the Saints 38-yard line. Favre could have run and gained at least five yards or thrown to Berrian for the same amount of yards. He instead threw to Rice over the middle, which got intercepted by Tracy Porter. Rice was Favre’s favorite target all year, and if he was not so beat up, he might have completed that pass, but throwing across the body is never a great idea. Troy Aikman said after that, “this is the cardinal sin.” If Favre were not banged up, maybe he would have run even though he was never known for being a runner, especially that season at age 40.

The Snafu in the Superdome! (Vikings vs. Saints, 2009 NFC Championship) – YouTube

What if the penalty does not happen? Would the Vikings have ran again? Maybe not. They ran the previous two plays for no gain. Before the penalty, they were looking at a 51-yard field goal, and while Ryan Longwell was one of the best in the game, a 50+ kick is never a gimme. Maybe they still would have run again and maybe gained a couple of yards, making the kick 49 yards.

Minnesota is still without a Super Bowl win. That team was good enough to win it that year and had a great shot. How fun would it have also been winning it all with Favre? A guy who was the enemy for 16 seasons and tormented the franchise many times. It could have been of the best stories in NFL history. It would have also made the Vikings-Packers rivalry even more fun. Sure, Vikings fans would not have liked hearing Packers fans always saying, “you needed our guy to win,” but in the end, a championship is a championship, and Vikings fans could have been able to say he won just as many rings in one season with them as he did in Green Bay for 16 years.

Favre came back in 2010 with the Vikings but struggled all year with 11 touchdowns and 19 interceptions. Vikings went 6-10 and missed the playoffs. He retired for good after the season; five years later, Green Bay retired his #4. Had he won a Super Bowl in Minnesota, how long would it have taken Green Bay to retire his number, and how long would it have taken for their fans to forgive their former hero? Would Minnesota have retired his number?

While that was a very memorable season, so many what-ifs still remain from that season, and it will forever be one of the biggest heartbreakers in team history.