Kirk Cousins’ Future in Purple Should Depend on Rodgers 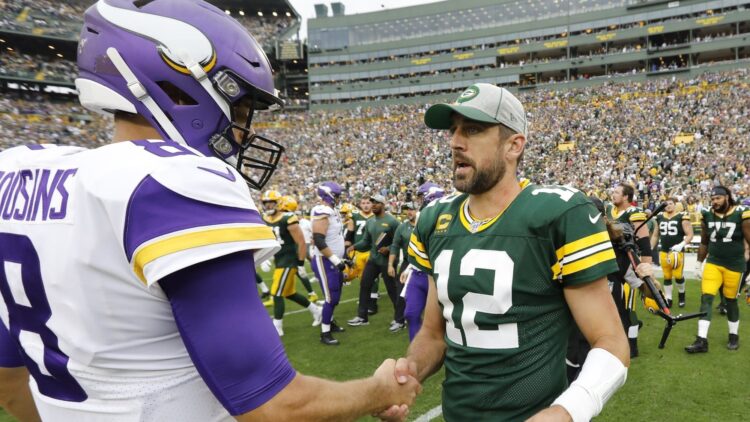 Once again in Minnesota, a Vikings quarterback’s future is uncertain.

Kirk Cousins’ performance over the past several seasons has divided the fan base. Half believe he is a gifted passer when gifted the tools to succeed, possessing championship potential. The other more vocal half believes that he has robbed the Vikings of millions of dollars while providing little in return.

Like most nuanced issues, the correct answer is somewhere in the middle. While he has not shown the ability to overcome disasters similar to Mahomes or Allen, he is not outright incompetent like Baker Mayfield in 2021. With a $445 million cap hit impending, what should the Vikings do?

I believe that the answer should depend on what happens with Aaron Rodgers.

Contrary to the beliefs of people and organizations such as SKOR North, Cousins is not a bad QB. While he does have drawbacks such as mobility and pocket presence, one can count on both hands the number of passes he just flat-out missed last season. Accuracy is his biggest strength. That accuracy is only challenged when faced with inadequate pass protection.

The Vikings offensive line was 27th in the league pass-protection-wise. Now, let me face the audience with a rhetorical question: What is easier, finding a solid right guard and center? Or unearthing the next Patrick Mahomes or Josh Allen?

If your answer is a new quarterback, you think like Phil Mackey.

However, one can make a successful argument that Kirk takes up too much cap space, thus not allowing the Vikings to fully build a solid team around him.

There are three solutions to this problem. 1. Draft better. If a team needs free agency to fix all its problems, you’re poor at drafting and need a new GM, which the Vikings have done. 2. The following solution is to trade Cousins and begin a total rebuild with your compensation. The Vikings should not trade anything other than a first-round pick while eating some of that salary cap. However, trading Kirk only makes sense if you believe there is a better replacement. No one knows if Kellen Mond is ready to ascend to that spot. Maybe we would understand if Zimmer didn’t start Mannion only out of spite towards Rick Spielman. 3. Furthermore, your third option is drafting a new quarterback. This is not a quarterback draft class of note. There may be a diamond in the rough, but the chances of that are incredibly slim. So, what should the Vikings do?

If Rodgers is gone, the division is wide open. Trading the best quarterback in the NFC North for a rebuild during a time when you are the best team would be foolish, to say the least. That just gives opponents a better shot.

The biggest weakness of the Vikings last year was defense, clock management, and offensive play calling. With a new offensive coordinator and head coach, I’d expect play calling and time management to improve. With that being said, if Rodgers comes back to Green Bay, things become much more difficult. With Rodgers back, I would advise starting a full rebuild and preparing for an NFC North without him.

My thoughts can be boiled down to this, with a wide-open NFC North, I find it counterproductive to finally start a rebuild. Plus, if the Vikings can rebuild their trenches like the 49’ers, they could still be a serious contender.