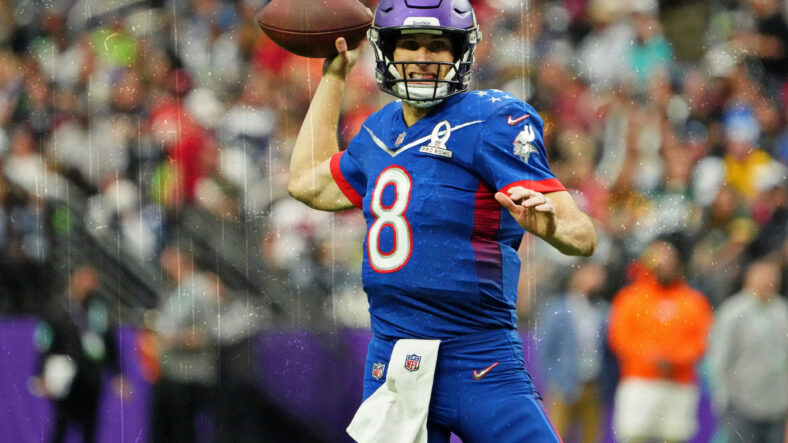 Based on polling by ESPN of coaches, executives, and players, Minnesota Vikings quarterback Kirk Cousins received a rather Cousins-esque placement in 2022 quarterback rankings.

Cousins wasn’t nominated for the Top 10, nor was he one of the passers mentioned in three ‘honorable mentions.’ Instead, Cousins was the one quarterback throughout ESPN’s process to achieve “Also Receiving Votes” status.

Unsurprisingly, per his existing reputation, that plops the Vikings signal-caller at 14th-best leaguewide according to his peers. In the last two seasons, Cousins has accrued impressive statistics by any standards — 68 touchdown passes to 20 interceptions — while his team bumbled to a 15-18 (.454) record.

From the ESPN polling, these are the league’s Top 10 passers with two months to go before the 2022 season:

Most criticism of Cousins is rooted in a statistic developed over the last decade — quarterback record. Despite 53 players on a football team, media entities assign a single player a “record.” And because a quarterback touches the ball most often, he foots the bill with the tennis-like record.

Utilizing quarterback record is strange, though. It’s only valid some of the time. For instance, the metric is used to prop up young passers like Mahomes and Allen, who own impressive quarterback records. But when adjudicating the QB records of players like Mitchell Trubisky and Deshaun Watson, the stat is suddenly no good or met with “yeah-buts” from fans and pundits. Trubisky’s career record is 29-21 (.580), whereas Watson checks in at 28-25 (.528). And beyond the shadow of a doubt, Watson is a more prolific football player than Trubisky.

Thankfully for Cousins’ sake, he’ll get a chance to navigate a Stafford-like path in 2022 and perhaps climb the rankings for 2023 and beyond. Minnesota moved on from its general manager and head coach this offseason, onboarding Kwesi Adofo-Mensah as general manager and Kevin O’Connell as head coach. O’Connell and Stafford worked together — rather successfully — in Los Angeles, so the hope by Vikings brass is that O’Connell can do for Cousins what he did with Stafford in Tinseltown. Before joining the Rams, Stafford was a career “loser” with an embarrassing 74-90-1 (.451) quarterback record as the Detroit Lions QB1.

Since joining the Vikings in 2018, the only quarterbacks to throw more touchdowns and fewer interceptions than Cousins are Aaron Rodgers, Patrick Mahomes, and Russell Wilson.