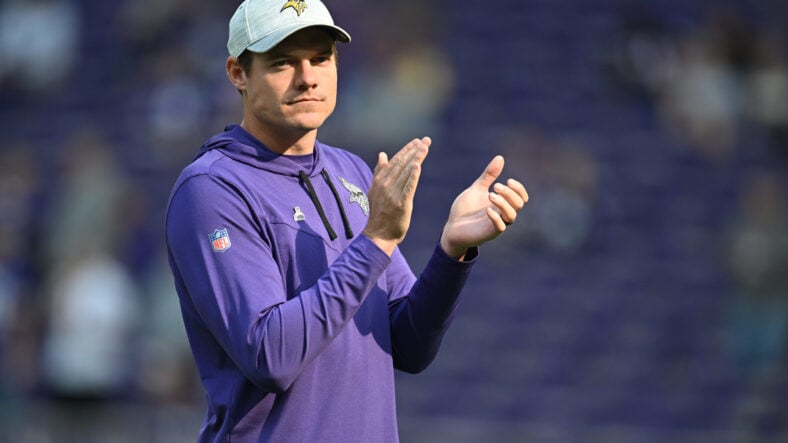 The Minnesota Vikings are 5-1 through their first six weeks of the 2022 NFL season. The lone loss was a drubbing in Philadelphia against the Eagles, but they’ve shown up every other week in the win column. For a team that clearly underachieved last year, Kevin O’Connell’s presence at head coach continues to make all of the difference.

There’s no denying that Mike Zimmer had run his course with the Vikings. He was often overlooked as a head coaching candidate because of his harsh personality, and the likelihood that he would not mesh well with his team. That was suppressed at the beginning of his time in Minnesota, and the ability to coach up a defense wound up paying dividends. When the offense struggled, however, and the game began to shift, he folded.

Zimmer was shown a necessary exit in Minnesota, and never could get on board with the quarterback under center. He struggled to innovate on the offensive side and wrapped up his tenure by denying a star receiver an opportunity to grab yet another record.

It was really a cumulative set of circumstances that led to his exit, but Zimmer went down in the ball of flames that could have been seen from a mile away.

When Minnesota tabbed Kwesi Adofo-Mensah as their general manager, his job first was to find a head coach. Kevin O’Connell represented everything Zimmer was not, and as the game has evolved, he represented the youth movement entering the head coaching ranks.

The Vikings job should’ve always been seen as desirable because of the immense talent in skill positions, and someone figuring out how to unleash them all seemed well-positioned for immediate success.

Six weeks into the season, over one-third of the schedule played, Minnesota has seen the change bear fruit.

The Vikings have a locker room that appears to have meshed well with one another. Kirk Cousins is being supported by a coach he knows from his days in Washington, and Justin Jefferson is being fed the football at a Cooper Kupp-like rate. The offense has remained on the field in key situations, and more chances have been taken as a whole.

With him, O’Connell has brought in a staff that has the Vikings working well as a unit. Although the defense is still leaky, they have continued to keep points off the board and buckled down when necessary. The offensive line is arguably better than we’ve seen in years, and the special teams unit is generating head-turning plays on a weekly basis.

Then there’s leadership, and that permeates throughout a team. Minnesota has multiple come from behind victories this season, and they quickly washed away the Eagles loss. They made the best of a trip to London, and then they refocused to win on the road in Miami.

Plenty of these same types of scenarios presented themselves last season, and the key difference is that Minnesota now has a resolve to persevere through them.

It may be shocking to those outside of this market that the Vikings are 5-1, but if a change at head coach was to be the biggest boost for this season, the results shouldn’t surprise anyone. The Vikings aren’t alone in this revelation, New York Giants fans are benefitting with Brian Daboll having taken over for Joe Judge. When you get the leader right, and talent is in place, the circumstances will take care of themselves.