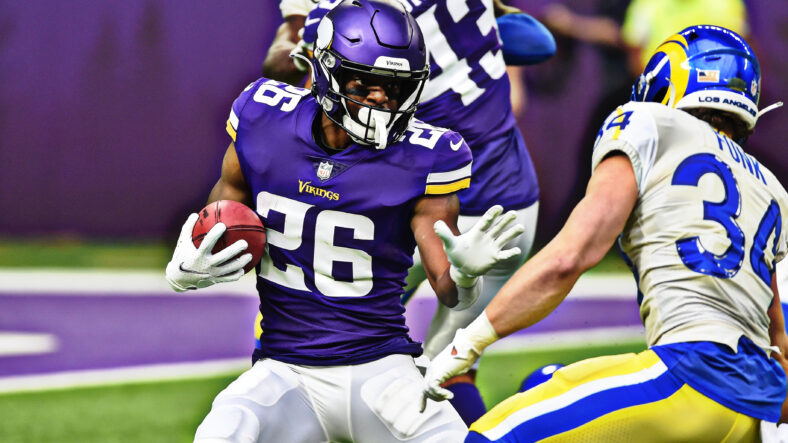 Minnesota Vikings training camp is two weeks away, and the franchise will host a few intriguing roster battles, including right guard, starting cornerbacks, and QB2.

But don’t rule out a competition for the backup running back, at least according to “voice of the Vikings,” Paul Allen.

Before the commencement of training camp, incumbent RB2 Alexander Mattison is the odds-on favorite to retain his job, but whispers since April’s draft imply Mattison could be a surprising cut candidate. Why? Well, the Vikings employ Dalvin Cook, Kene Nwangwu, Ty Chandler, Bryant Koback, and Mattison at RB. And last year, the Los Angeles Rams, Kevin O’Connell’s former team, carried just three running backs onto the 53-man roster. Plus, the Vikings assortment of Cook, Nwangwu, Chandler, and Koback doesn’t even include fullback C.J. Ham, who figures to make the Vikings squad this year, too.

While Allen doesn’t suggest a Mattison release from the roster, he does foresee second-year speedster Kene Nwangwu possibly seizing the RB2 role. On the Vikings YouTube channel last week, Allen opined, “Mattison would be prohibitively favored, but everything is new. So Alex doesn’t roll in and go like, Oh, I know that play. I know that. I know that. I love that. It’s all new, and Kene’s fast. If Kene can catch passes, then he can usurp Alexander.”

For three seasons, Mattison has been a complimentary back to Dalvin Cook. Stylistically, the men are different. Cook is a powerful slasher who can catch passes out of the backfield. Mattison is a bowling ball that can jump over defenders’ craniums.

Yet, as Minnesota’s offense transitions to pass-happiness, Mattison could be the odd man out, particularly because, as Allen mentioned, the running backs may be showcased as pass-catchers. Mattison isn’t incapable of catching passes — he just hasn’t done much of the task through three seasons, nor have the Vikings requested the skillset from the man.

During Nwangu’s rookie season, he rose to prominence for two reasons a) He possesses Tyreek Hill-like speed b) The Iowa State alumnus took two kick returns back for touchdowns.

The Zimmer version of the Vikings didn’t do much with Nwangwu as a running back, though. Klint Kubiak dialed Nwangwu’s number for handoffs 13 times, resulting in 61 yards — for a notable 4.7 yards per carry. Ergo, if the Vikings utilize Nwangwu, it will be new and indeed an O’Connell-driven strategy.

Moreover, rookie Ty Chandler cannot be ruled out of the mix for RB2. Ironically, he’s older than Mattison without taking an NFL snap. Minnesota likely drafted Chandler for a reason, and letting a 24-year-old running back marinate on the practice squad might be strange. Most running backs begin careers in the NFL around the 21 or 22-year-old range. Chandler is late to the party.

Overall, RBs should be monitored during training camp. Allen is connected and isn’t falsifying the Nwangwu theory for giggles.