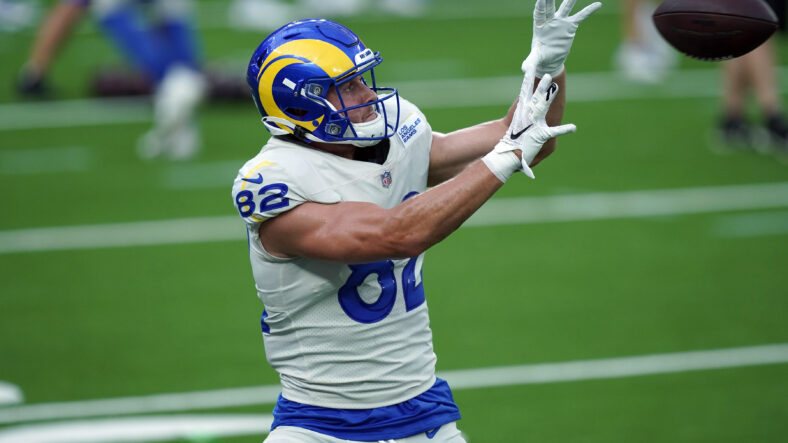 Under Mike Zimmer, two-TE sets were the norm, which led the Vikings to carry two tight ends expected to significantly contribute in the passing game.

The signing of Johnny Mundt signifies a change in approach from the new regime. One that probably should have been expected. I don’t foresee as much 12 personnel (1 RB, 2 TE, 2WR in the Vikings future.

I expect Kevin O’Connell and Wes Phillips to put much more emphasis on wide receivers three and four. Justin Jefferson, Adam Thielen, KJ Osborn, Ihmir Smith-Marsette, Irv Smith, and Dalvin Cook is an abundance of playmakers that most teams in this league would kill for. Signing a blocking tight end makes sense. Phillips, who was Mundt’s tight end coach in LA for the past three seasons actually name-dropped him in his introductory press conference when talking about personnel groups.

“When you’re looking at what we were doing in L.A., at one point we had Robert Woods, we had Cooper Kupp and then we kind of mixed in Odell [Beckham, Jr.] toward the end when Robert was out. So it’s really about the personnel that you have,” Phillips said. “We were more 12 personnel early in the year when we had a guy in Johnny Mundt, who was an effective blocker in 12 personnel to go with [tight end Tyler] Higbee. Later on, that wasn’t the case.”

Mundt signs a two-year deal to follow Kevin O’Connell to Minnesota from the Los Angeles Rams. Where he has been for the past five seasons. Standing at 6,4 and weighing 233 lbs, he is an excellent blocking tight end.

O’Connell and Wes Phillips know exactly what they are getting with Mundt. As a major weakness of the Vikings offense is universally accepted as the offensive line, a highly regarded blocking tight end makes perfect sense, but our new head coach believes he can be more than that.

Speaking before last season as the Rams offensive coordinator, O’Connell spoke about Johnny Mundt in glowing terms. As being “one of the best” at blocking from the edge at the Y and F position, he can be a vertical threat who has “playmaking ability with the ball in his hands, yards after catch,” and speaking of “different ways we can activate him in our offense.”

His best game in LA came in 2020 against the Chicago Bears, including the impressive play in the above tweet. With Tyler Higbee absent through injury, Mundt got the start and caught all three of his targets for 48 yards. Higbee returned the following week, and Mundt never saw another target in the remaining nine regular-season games. O’Connell’s hopes for Mundt last season never came to fruition after a shoulder injury was followed by a torn ACL that ended his season after only six games.

O’Connell and Phillips think highly of Mundt. It will be interesting to see what his role in the team develops into. His blocking will be valuable, but can they unleash the vertical threat talked about last year?

With Tyler Conklin reportedly signing with the New York Jets. Mundt will likely compete with Ben Ellefson and Zach Davidson for the TE2 spot on the roster — a cheap signing the coaching staff know well and think highly of. This might not be a flashy signing to cause major excitement, but it is a solid one.