It’s Been a Good Week for Kellen Mond 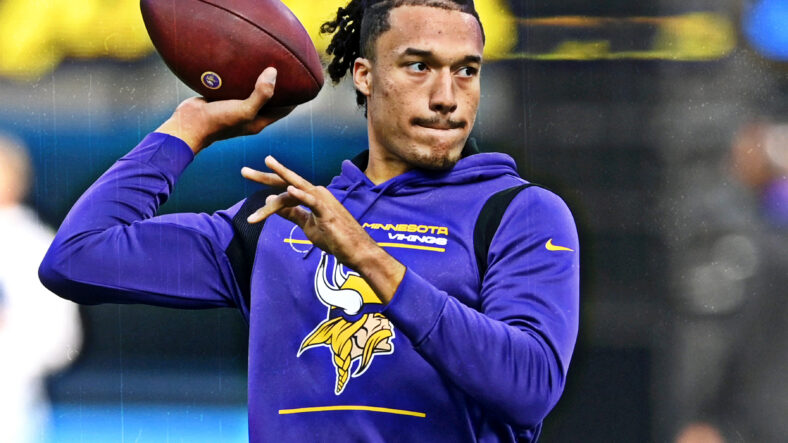 If a formal announcement was needed, it is time. Kellen Mond is out of the doghouse.

The Minnesota Vikings drafted the young quarterback from Texas A&M University in Round 3 of the 2021 NFL Draft, figured to earn QB2 duty and perhaps eventually take over for incumbent passer Kirk Cousins.

Mond did nothing of the sort and hinted at neither assignment in 2021.

Instead, Mond was relegated to the QB3 doghouse by the team’s old coaching staff, culminating in an infamous moment after the Vikings lost to the Green Bay Packers in Week 17.

But Mond stuck around, leaving fans wondering if Zimmer was overly critical while Mond was actually a promising project — or if the franchise had drafted a lemon.

Lemon is nowhere near the conversation under the team’s new skipper, Kevin O’Connell. Mond was present at Vikings minicamp this week and took QB2 snaps along with his teammate and competition for the gig, Sean Mannion. The atmosphere is different as it feels like O’Connell and his staff actually embrace Mond, whereas the Zimmer regime seemed to merely tolerate the 22-year-old.

In addition to taking QB2 snaps — which a 3rd-Rounder should do according to talent — O’Connell sang Mond’s praises on Wednesday, “Kellen’s having a good spring so far, working incredibly hard, digesting the system. He made a couple of checks yesterday at the line of scrimmage that he wasn’t prepared play-by-play for; he just instinctively did it. Those are the little things you look for.”

Plain and simple, Mond is providing encouragement to the Vikings coaching staff. Five months ago, Minnesota’s leadership didn’t particularly want to see any more from him. Thankfully for Mond’s sake, he doesn’t have to play God-like this summer. Mannion isn’t a Nick Foles-like gamebreaker from 2017, so Mond should be able to win the summer camp battle if he’s worth his salt.

If he does not, Zimmer will be vindicated to a degree.

For now, though, Mond will rightfully get a look as the team’s backup quarterback behind Cousins. Had the Vikings ownership stuck with Zimmer beyond 2021, Mond could’ve stayed banished to irrelevance or not even made the team this season.

The aforementioned Cousins is extremely durable and hasn’t missed a game to a non-virus injury in his career. Yet, if something injury-wise finally happens to Cousins in 2022, QB2 is considered a team weakness as of May. Mannion hasn’t displayed any Case Keenum or Foles-ish magic. A swift blossom from Mond would be the franchise’s only rostered recourse. Therefore, the Vikings have an immediate vested interest in Mond emerging as a serviceable — and possibly exciting — backup option.

The Vikings have drafted two quarterbacks in the 3rd Round of drafts in team history. Mond was the latest in 2021. The other was Fran Tarkenton.