Infamous 2021 First Round LT to Make Bears Debut This Weekend 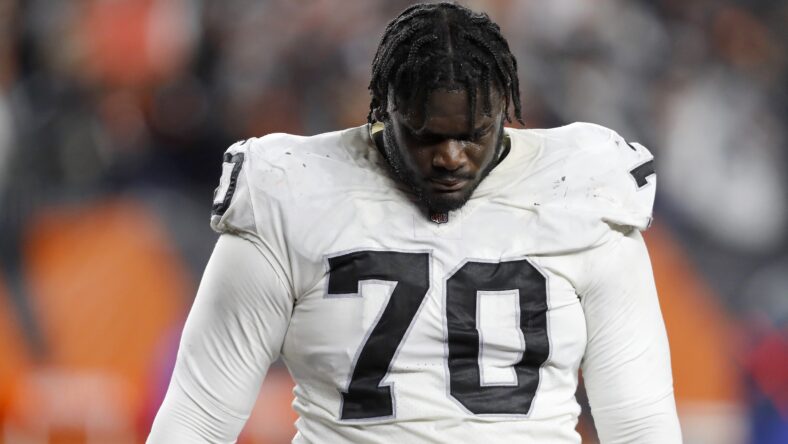 When the Las Vegas Raiders went on the clock with the No. 17 overall pick in the 2021 NFL Draft, most people assumed they would be the team to snag Christian Darrisaw to solidify their offensive line. Instead, as the Raiders always do, they decided to go out on a limb and select Alex Leatherwood.

This allowed the Vikings to snatch Darrisaw at No. 23, and he has emerged into one of the very best left tackles in all of football. Meanwhile, Leatherwood played a grand total of one season in Las Vegas before being waived by the Raiders prior to the 2022 season.

Interestingly, the Bears claimed Leatherwood off waivers, but he has been on the NFI list for the entirety of the regular season. Now, ahead of Chicago’s matchup with the Dallas Cowboys on Sunday, the infamous 2021 first-round pick is set to make his Bears debut.

The fact that the Bears chose to claim him is interesting considering that it means they bear the brunt of his first-round contract. He joins a Chicago offensive line that has been extremely banged up. Tackle Larry Borom is out for Sunday’s game and interior lineman Lucas Patrick is on injured reserve due to a toe injury.

From what we saw last season, Leatherwood may not be an immediate fix to these problems. PFF graded the rookie as one of the worst offensive linemen in all of football, giving him a score of 45.0. He was penalized 14 times during the 2021 regular season and allowed eight sacks, again per PFF.

Leatherwodd is one of just two players from the first round of the 2021 Draft no longer employed by the team that drafted him. The other is Kadarius Toney who was recently traded by the New York Giants to the Kansas City Chiefs.

Chicago suddenly finds themselves in the midst of the playoff hunt after a surprise blowout victory over the New England Patriots in Foxborough. They are 3-4, tied for second in the NFC North, and they are just half a game behind the Los Angeles Rams for the seventh seed in the NFC playoff picture.

For them to find a way to compete for that playoff spot, better o-line play and protection of young QB Justin Fields is crucial. We’ll see if the second-year tackle can provide a spark for the Bears offense.