‘Horrible’ Defender Will Be Your Favorite Viking 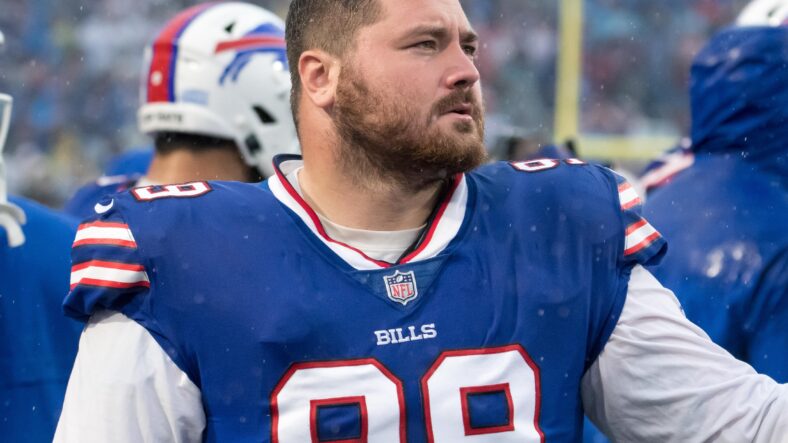 The Vikings signed Harrison Phillips and Jordan Hicks this free agency and held their introductory press conference on March 17th. These interviews were light-hearted and genuinely fun to watch. Harrison Phillips, aka ‘Horrible Harry,’ might just be your new favorite Viking.

When the Vikings announced that they were signing Horrible Harry, it seemed odd as they already had Dalvin Tomlinson and Michael Pierce. However, after some negotiating, the Vikings could not convince Pierce to take a pay cut. Now we know that Horrible Harry will be the starting nose guard in 2022.

After watching his press conference, I am 100% in on this dude. Not only did he play well for Buffalo, but he is also a stand-up person and witty. He understands the role a nose guard plays. More importantly, he understands the importance of being a team player and creating a culture.

Creating culture might have been the best thing he learned during his time in Buffalo. He played a role in building a once-struggling franchise into a team that will contend for years. When asked about his time in Buffalo, he said it’s important to follow the process and have everyone buy into the program.

On the Field – Unselfishness is Needed

During his introduction, Horrible Harry described the nose guard position as a “fire hydrant at the dog show.” By this, he meant that your job at the nose guard position is not to make the big play. It’s to eat up blocks and allow your linebackers to make plays. He knows it’s not a highlight position, but he understands the critical role it plays on the defense.

This unselfishness is exactly what it takes to build a winning culture. Everyone needs to do their job and not try to be the hero. He mentioned that when a player tries to shoot a gap to make a play, it could lead to the running back cutting back and gashing the defense for a significant gain.

Not only does Horrible Harry understand his role, but he also relishes physicality. He enjoys the one-on-one battles as it reminds him of his time as a competitive wrestler. He refuses to get pushed back and lose those battles. This is an excellent mindset for Horrible Harry to have because he is a bit undersized as a nose guard.

One reporter asked him about Ed Donatell’s defensive scheme. Horrible Harry raved about the intellectual side with the ability to use blitzes and stunts to disguise the rush. He said that when it comes to pass rush, it’s not all about stats. It’s about getting the quarterback and protection hurried and confused. Hurrying the quarterback can play a major factor in disrupting the passing game.

Off the Field – Not so ‘Horrible’

Although his mom gave him the nickname ‘Horrible Harry’ as a kid because it was his favorite book, he’s not so horrible. Horrible Harry said on the field he loves to be aggressive and violent, but off the field, he is actually a nice guy. This is clear as he has been nominated for the Walter Payton Man of the Year Award and the Alan Page Award.

His work with creating Harrison Playmakers is what he is passionate about off the field. He wants to be sure he leaves a positive imprint on the community outside of football.

However, he does have a little mischief in him, which is probably another reason for the ‘Horrible Harry’ nickname. As an elementary-aged kid, he decided to act out one of the stories. One day he found a snake outside during recess and figured it was a good idea to bring it back to the classroom.

At the end of the day, he is a great guy off the field and is excited to be in Minnesota. He walked through the Vikings Museum and witnessed the history of the organization. Now it’s up to him to live up to the legacy laid by the legends before him.